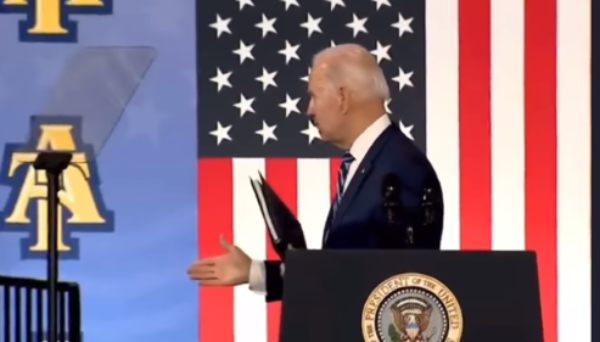 What's This? Politifacts Hacks Covering For 'The Big Guy'? Say It Ain't So...

Leave it to the so-called 'independent fact-checkers to try and convince the public to not believe their 'lying eyes'. In a new article, Politifact's claimed that Biden (seen below) did not stick out his hand for a handshake. Politifact's managed to get the clip of Biden shaking hands with thin air flagged on Facebook as "false news and misinformation", but is it?

PolitiFact's writer, Gabrielle Settles, declared the hand-shake to nowhere as 'False' in an article where she gave a few camera angles to choose from. I have viewed them all and still see Joe attempting to shake hands with no one but let's look at her findings and you be the judge:

"We took a look at those clips and the full videos of Biden’s speech. They don’t add up to the claim that he was trying to shake hands with thin air — different angles show that he was gesturing toward onlookers behind him.

A C-SPAN video of Biden’s entire speech shows an angle from Biden’s right side — after he finished speaking at the 53 minute mark, he turned to those gathered to his right behind him and pointed his hand at them as they stood up to applaud. He then turned to his left and did the same to those seated on that side, who also stood and clapped. Biden smiled at both sides before walking down the ramp towards the audience in front of the podium."

[You can view C-SPAN's video Here—Just skip to the last 4 minutes or so.] The only reason I didn't include it is you cannot preset a start time and their video is over 54 minutes long.

The article went on to sight a YouTube video that shows Biden being 'flanked by security', writing:

"A YouTube video from WFMY News 2 from Greensboro, North Carolina, shows Biden briefly speaking to audience members before walking out of the room flanked by Secret Service agents. "

Now, if the writer is referring to *after* Biden got off of the podium, sure—He spoke with members of the audience, but if she is claiming that his thin air handshake was Biden attempting to speak to the audience I have to call BS. I have magnified this clip and rewatched it to be sure, and it doesn't appear to be him speaking to the audience.

I'm pretty sure she was referring to after Biden left the stage. Either way, it was irrelevant gargle and seemed more geared towards muddying the waters.

If anything, he looks like he's trying to figure out how to get down from the podium.

No matter what angle you look at this, or what spin the left derives, this was just another shining moment for Biden. The left is just in too deep to admit to Biden's diminished mental state but hey, I can't blame them. If Biden is recused, that would leave Kamala at the helm and Americans would just be looking at an empty podium while the left tries to convince us all that Harris was just invisible.