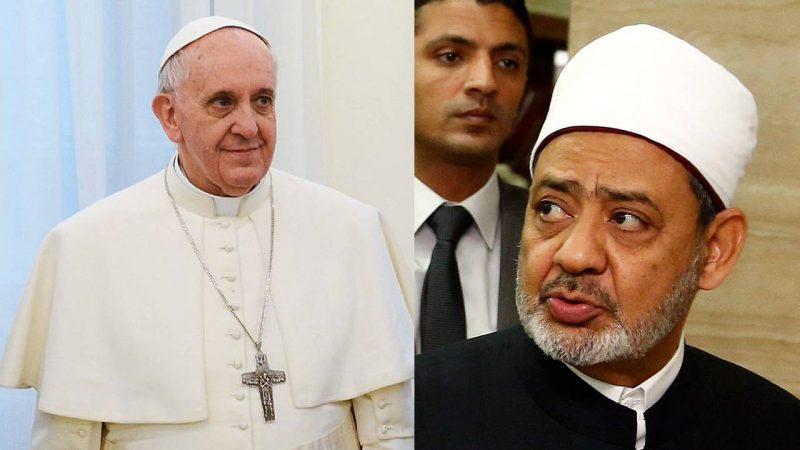 SHOCKING: Why Is The Pope Kissing A Muslim Imam...On The Mouth?

During an inter-religious meeting held in Abu Dhabi in the United Arab Emirates, Pope Francis and Grand Imam Sheikh Ahmed Al Tayeb were two key figures for the meeting.

This is a normal gathering for the two religious leaders. They have met a number of times.

According to India Today

Pope Francis and the grand imam of Egypt's Al-Alzhar Sheikh Ahmed al-Tayeb on Monday met in Abu Dhabi, embraced each other and called for peace. The two religious leaders signed a statement with their hopes for world peace and human understanding.

The document was signed in the name of "all victims of wars, persecution and injustice; and those tortured in any part of the world, without distinction".

It said: "We resolutely declare that religions must never incite war, hateful attitudes, hostility and extremism, nor must they incite violence or the shedding of blood."

The grand imam of Egypt's Al-Azhar mosque and university, called on the Muslims in West Asia to "embrace" local Christian communities while telling the Christians that they are "citizens of this nation with full rights and responsibilities".

"Continue to embrace your brothers the Christian citizens everywhere, for they are our partners in our nation," said the grand imam, who is the highest seat of learning in Sunni Islam.

Pope Francis also called for full religious freedom in the Muslim- majority region, where restrictions are placed on non-Muslim expressions of faith. To promote "concrete paths of peace" people of different religions will have to come together, he said.

But something strange seems to have happened when they embraced each other after signing a document on fighting extremism.

As they got closer, it looks as though they kissed on the mouth.

Take a look for yourself and see what you think.

Pope Francis and Grand Imam of al-Azhar Sheikh Ahmed al-Tayeb kiss each other during an inter-religious meeting in Abu Dhabi, and more photos of the day: https://t.co/Qbp0Nkkoky | ? Tony Gentile pic.twitter.com/RbfirftSsT

Yep, it sure looks like a kiss doesn't it?

This wouldn't be the first time that a Pope would have kissed another man on the lips.

In fact, this wouldn't be the first time that al-Tayeb would have kissed one of the popes.

He also had a moment with Pope Benedict XVI when they kissed on the lips as well.

So both Christianity and Islam condemn homosexuality, right? Well, then what do you call this exactly? I don't know too many men who go around kissing other men on the mouth.