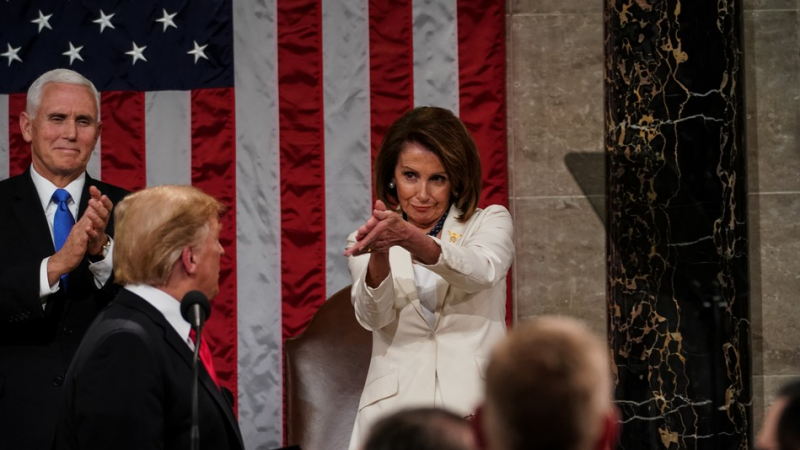 If you haven't caught it yet, Nancy Pelosi's clap for President Trump has been spreading across the internet like wildfire.

What is it exactly? Is it just a meaningless clap? Is it an insult? Or is it something more?

According to Christine Pelosi, Nancy's own daughter, that clap was reminiscent of her younger days.

Christine Pelosi tweeted: "Oh yes that clap took me back to the teen years. She knows. And she knows that you know. And frankly she's disappointed that you thought this would work. But here's a clap. #youtriedit."

#waybackwednesday - oh yes that clap took me back to the teen years. She knows. And she knows that you know. And frankly she’s disappointed that you thought this would work. But here’s a clap. #youtriedit pic.twitter.com/vUCX2uAUvv

Take a look at this video below to get the full context of what President Trump was talking about and Pelosi's reaction.

Notice that she claps and is staring President Trump down just waiting for him to look her way. When the President does look in her direction she makes a little duckbill/pursed lip face at him as if she were saying, "Isn't that cute?"

Another thing you may have noticed during the address is that Nancy Pelosi spent a lot of time looking at a stack of papers. People have been curious as to what these papers were.

A spokesman for Nancy Pelosi said that it was a copy of President Trump's speech. If you look closely enough, you'll even notice the President's signature through the stack of papers.

Nancy also seemed to call the shots for the Democrats during the speech.

According to Business Insider,

At one point she held up a hand to try to quiet Democrats who jeered as Trump spoke about migrant caravans.

Another time she encouraged Democrats to get up and cheer when Trump referred to the record number of women in Congress.

Finally, I'll leave you with Nasty Nancy's response to the President's speech.

It will take days to fact-check all the misrepresentations that @realDonaldTrump made during tonight’s #StateOfTheUnion address. #SOTU https://t.co/m7UbKmzzRG pic.twitter.com/oKGdJUsVk3