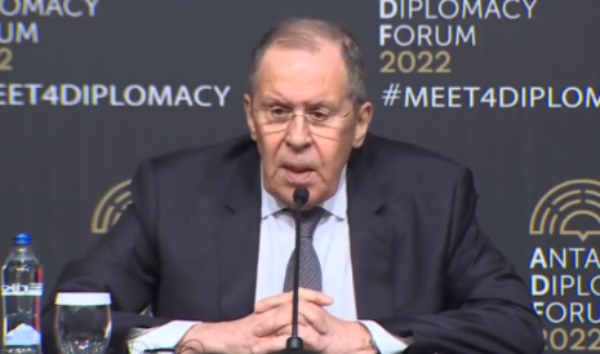 Russian politics, where there are no rules and the truth doesn't matter. We now have Russia’s foreign minister Sergei Lavrov saying that the world doesn't need to worry, Russia will not attack other countries. Why? Because according to him, and only him, Russia never attacked Ukraine in the first place.

“Why should they believe a word you say?” asked a reporter. The exchange was translated to English by Wallstreet Journal:

The Russian foreign minister, in a news conference following the meeting, denied Russia had invaded Ukraine.

“We have no plans to invade other countries. We didn’t invade Ukraine,” said Mr. Lavrov, speaking in Russian through a live translation, in response to a question about Russia’s intentions.

“I think you said Russia did not invade Ukraine when it clearly has,” said a journalist. “Why should the Ukrainians take you seriously? Why should they believe a word you say?”

“I am talking about the security of the whole continent, including Ukraine,” said Mr. Lavrov in a rambling answer.

Belarussian journalist Tadeusz Giczan also thinks Russia’s other neighbors should be afraid after listening to this deceit.

I think this sounds almost like a threat at this point. Thus far, when a Russian politician vows not to attack, they attack.

Puppet Can Be Seen Below:

Ukraine’s president, Volodymyr Zelensky said Russia was a “terrorist state” in his latest video address. “The world must know it. The world must acknowledge it,” he said, and also accused Russian forces of attacking a convoy of humanitarian aid for the besieged city of Mariupol.

The Russian defence ministry said that it would open up humanitarian corridors for civilians to evacuate from Kyiv, Kharkiv, Sumy, Chernihiv and Mariupol. It also accused Ukraine of using security service personnel to drive aid trucks and spy on Russian military positions.