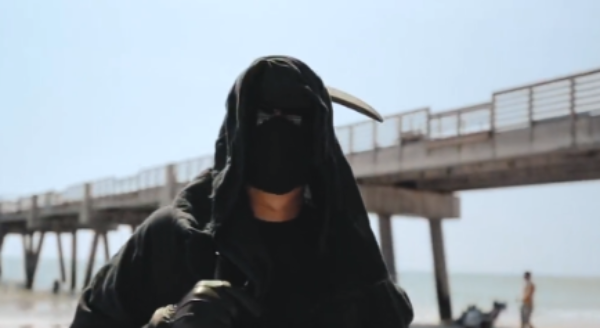 It's my opinion that there have always been 'special' people among liberals but this guy is the walking embodiment of an unhinged lib. A Florida lawyer and dramatic activist just announced his bid for the Attorney General position. Daniel Uhlfelder is better known as the 'COVID beach grim reaper' for dressing as, you guessed it, the grim reaper and walking the beach.

Uhlfelder's obvious political theater move was to protest the people using the beach during the pandemic. It did not work, of course. So now, he wants to bring that level of lunacy to an official office—Because that's everyone's needs. More nuts in the bag.

Uhlfelder released a 3 min video on Twitter announcing his running where he filled himself sitting on the couch while criticizing 'armchair activists.

“Well, that’s not really me,” he says as footage of him walking the beaches in his grim reaper costume appears on the screen. “Actually, that’s me. The guy in the costume.”

He also dropped in some Nazi rhetoric, “growing up, my parents never let me forget it.” He continues, “there’s a lot of bullying going on right now,” as footage of neo-Nazis protesting in front of a Starbucks plays. “And what do you expect when these are the faces of Florida’s leaders,” he says as images of DeSantis, Moody, and U.S. Representative Matt Gaetz appear on the screen.

“So I guess activism is kind of in my blood,” he said, adding that his kids are still young enough that they’re not embarrassed by him, “yet.”

"Today I am announcing my candidacy for Attorney General in Florida. Ron DeSantis and his sidekicks in Tallahassee have been warned," his post reads. lol

Today I am announcing my candidacy for Attorney General in Florida. Ron DeSantis and his sidekicks in Tallahassee have been warned. pic.twitter.com/i15q0zAoEN

Uhlfelder describes himself in the ad as “your average attorney and family man,” who was born and raised in Florida by parents who “immersed us in social justice, and introduced us to politicians who actually stood up for what was right.”