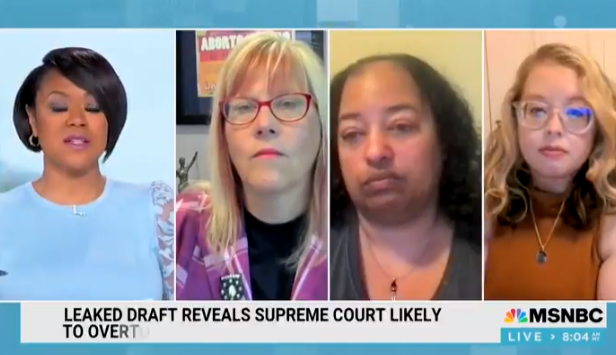 I guess one thing you can say here is that the nets don't half-ass anything. When they go crazy, they go all in. That's exactly how I would describe what on 'Cross Connection', Tiffany Cross's new show on MSNBC. President and CEO of Whole Woman’s Health, Amy Hagstrom Miller called the pro-life movement ‘Christian Extremism’ And ‘Terrorists’.

The whole rancid segment started with Co-Founder and Executive Director of SHERo MS, Michelle Colon, who referred to anti-abortion advocates as “terrorists,” in a clip posted to Twitter. Cross agreed with Colon’s sentiment, arguing that pro-life activists and supporters achieve their goals “through violence.”

Mind you, no one has gotten violent over the SCOTUS leak, at least on the right. But I digress...

“So, Michelle is right,” Miller stated, “there is violence and it is terrorism, and I think it’s very important for us to recognize that it is Christian extremism that is at the root of this shame and this stigma, that allows laws like this to pass, that allows justices like this to be confirmed and it does not represent the majority of feelings and beliefs of people in this country.

“Everybody knows and loves somebody who’s needed an abortion in their lifetime. This is not how any of us want people who need our compassion and our dignified care to be treated at any point in time,” Miller continued, “There’s no way that half of the country should lose access to safe abortion care because of a law like this. It’s time for people to speak up, and it’s been time for people to speak up.”

Miller concluded that her clinic and other clinics that provide abortions are “trying to do as much as we can to stay open as long as possible and welcome as many people for compassionate care as we can.”

On a side note, I wonder who all of this divisive drama serves? The courts will make a ruling, as they see fit. The fact that the media has gone all in should be enough to make anyone pause. I find it interesting that this leak happened just before the midterms. Sure, it could be some liberal staffer trying to get the word out—BUT to me, it seems just as likely that it's to stir the pot and draw voter attention away from issues like inflation, insane government spending, and the far-left agenda that's been dividing that party.

Maybe I'm reading too much into this but I don't think it's really that far-fetched. What do you guys think? Let me know in the comments below.