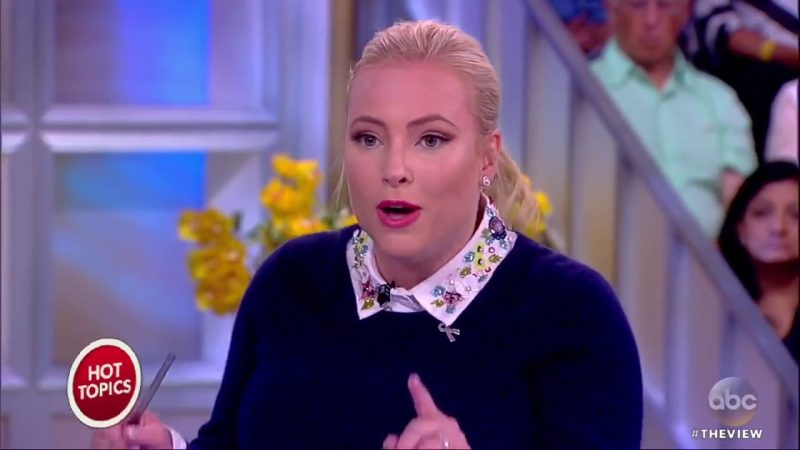 Meghan McCain Erupts On "The View" Co-Hosts, "Democrats Choose To Be The Party Of Infanticide"

Things got really heated recently on "The View" when Meghan McCain and Sunny Hostin got into a debate over infanticide.

Meghan McCain just let loose, and I think it was good that she did so and caused people to think, especially the liberals who watch the show.

Meghan McCain spoke up to shift the subject to the recent bill and said, "If Democrats want to win an election, going forward, are you going to be the party of late-term abortion? The party of infanticide? If you think that is how you win back the White House, I'm here to tell you I've spent a lot of time in red states. I'm from a red state, and that is a losing argument."

This is when Co-host Sunny Hostin pushed back against McCain.

"I thought that you were pro-life like me?" McCain asked Hostin.

McCain answered in disbelief, "So you think a baby born from a botched abortion should be put down like a dog or a cat?"

Sunny Hostin replied to McCain saying, "In terms of the bill that the Senate Dems blocked yesterday, my understanding is that the reason that it was blocked is because the Dems felt there wasn't a need for a new law. Under the bill that was proposed, it required that all babies born alive be immediately transferred to a hospital, and that is not always safe for a newborn."

Please tell me she didn't just say that.

How in the WORLD is she going to say that transferring the dying baby to a hospital isn't always safe for a newborn? Because letting it lay there and die is safer?

Anyone who supports this idea must have a brain disease. Something literally is not working upstairs. This is unthinkable and the most deplorable abomination we have ever experienced in our lifetime.

Hostin claims that the Democrats voted no on the bill because it would hold doctors accountable for legal and criminal penalties for not complying with the law to move the baby to a hospital.

GOOD! This is exactly what should be done to these scumbags. Why do you want to show mercy on these doctors who attempt abortions, fail, then let them lay there to die?

Hostin continued, "This is not a new law. It's already required to provide medical care to infants born alive. This bill also required that all babies born alive be immediately transferred to a hospital, which, my understanding is, it's not always safe for a newborn. And passing this bill would impose legal and criminal penalties on doctors who won't comply with that."

You can watch the full debate below: