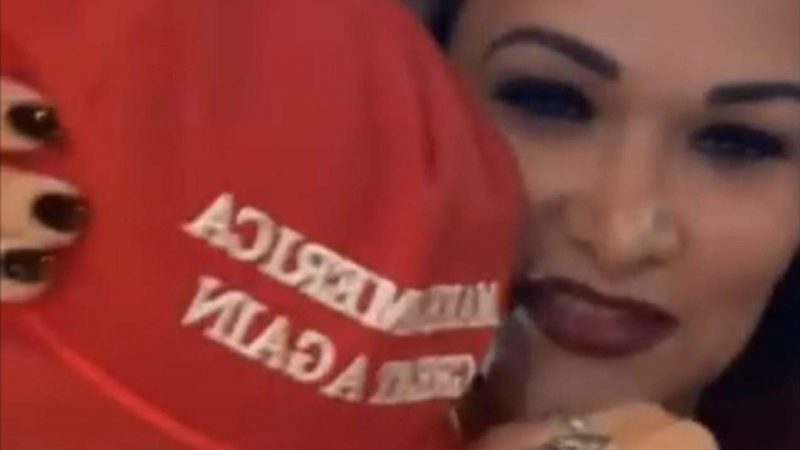 BUSTED! Is The Liberal Who Attacked Man Wearing MAGA Hat In Country Illegally?

Recently a video has gone viral of a woman attacking a man for simply wearing a MAGA hat at a Mexican restaurant.

The woman, Rosiane Santos is now in the custody of ICE.

The woman who was charged with confronting a man wearing a “Make America Great Again” hat inside a Falmouth Mexican restaurant is now in ICE custody. The department said she was in the country illegally.

Police said Rosiane Santos walked by Bryton Turner as he was eating dinner at Casa Vallarta and knocked the hat off his head. She then allegedly confronted him verbally.

Turner recorded video showing some of the confrontation.

Falmouth Police charged Santos with disorderly conduct following the incident earlier this month. On Tuesday, ICE took her into custody.

“Deportation officers with ICE’s Fugitive Operations Team arrested Rosiane Santos, an unlawfully present citizen of Brazil, today near Falmouth, Massachusetts,” said ICE spokesman John Mohan. “Santos is currently facing local charges for assault and other offenses. She is presently in ICE custody and has been entered into removal proceedings before the federal immigration courts.”

Here is one thing I have never understood about criminals. If you know you're in the wrong, why draw attention to yourself?

This just goes to show you how well their brains function.

A Massachusetts woman upset that a patron at a Mexican restaurant in Cape Cod was wearing a “Make America Great Again” hat was arrested for allegedly assaulting him.

Rosiane Santos, a 41-year-old immigrant, from Brazil living in Falmouth, was charged with disorderly conduct, assault and battery after a confrontation at Casa Vallarta” Mexican restaurant last Friday.

According to police, Santos was upset that a man – later identified as 23-year-old Bryton Turner of Mashpee – had the audacity to wear the iconic red hat at the Mexican eatery, Boston 25 reported.

Santos who is a Brazilian immigrant admitted that she was little tipsy when she lashed out on the man in the hat.

She offered the following statement: “I had a little bit to drink maybe that’s the reason that I couldn’t walk away but being discriminated for so many times in my life, I just had to stand up for myself,” she said. “He’s not a victim. I am the victim. I have been bullied, OK?”

Bullied or not, that doesn't give any person the right to bully someone else.