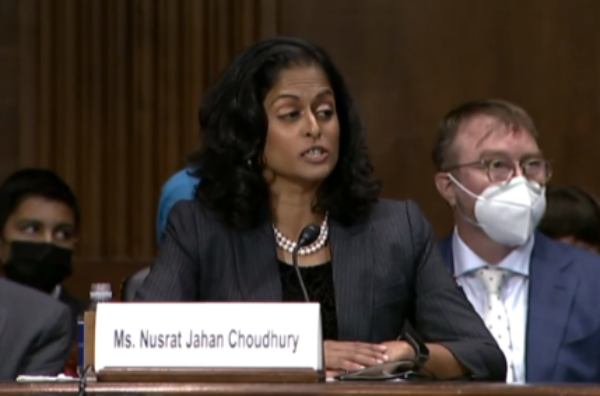 YES! Kennedy Gets A Crack At Biden's Cop Hating Nominee And It Was EPIC

At the confirmation hearings for Nusrat Jahan Choudhury, President Biden’s judicial nominee went head-to-head against Lousianna's straight-shooting Senator John Kennedy. The Senator didn't pull a punch and believe me, she flinched.  “So when you say something that’s incorrect it’s okay to excuse it by saying, ‘Oh, I was being an advocate?’”

Kennedy cornered her from the start asking her if she actually believed that claim.

“Senator, I said it in my role as an advocate,” Choudhury answered, sitting back smugly.

“Senator, I said it in my role as an advocate to make a rhetorical point,” Choudhury patronized.

“So when you say something that’s incorrect it’s okay to excuse it by saying, ‘Oh, I was being an advocate?’”Kennedy snapped. “What do you believe? Do you personally believe that cops kill unarmed black men every single day in America?”

“Senator, I believe law enforcement have an important and challenging job in this country,” Choudhury dodged.

“That’s not what you said though, Counselor,” Kennedy pointed out.

Choudhury postured, “Senator, I say before you here today that I do believe law enforcement have a difficult and challenging job, and I also understand the difference between —”

“I just think that’s an extraordinary statement to make with no data to back it up.” Kennedy interjected. ”None whatsoever. There’s no basis for you saying that, and you knew it then and you know it now. How could one possibly believe that you’re going to be unbiased on the federal bench?”

“Senator, I believe my record shows that I have worked collaboratively with law enforcement in Boston, Chicago, Mississippi, and Milwaukee to solve complex problems to promote constitutional, effective, and safe policing,” Choudhury answered.

“Your record shows that you believe cops are guilty until proven innocent,” Kennedy charged. “Your record shows that if a cop — if a cop shoots a criminal it’s the cop’s fault, and if a criminal shoots a cop it’s the gun’s fault. I’ve read your record. I’ve read your record … and I don’t appreciate you not answering the question straight up. I would respect you a lot more if you’d just tell us what you believe and not try to hide it.”

Pres. Biden’s judicial nominee claimed that police kill unarmed Black men in America every single day. I asked if she really believes that?

“I said it in my role as an advocate.”

“I said it in my role as an advocate to make a rhetorical point.” pic.twitter.com/AgVp5j38Zy

That's the thing, isn't it? We would all have a lot more faith in these lawmakers and politicians if they just shot it straight from the hip but they don't. People are allowed to change views, sure, but how often does that happen. Like, really happen? These idiots change opinions to fit the current agenda—And I'm talking about both sides.

If they were held accountable for the garbage they say to play some role for whatever party they're trying to please, I think they'd play it a little closer to the chest. What do you think? Let me know in the comments below.