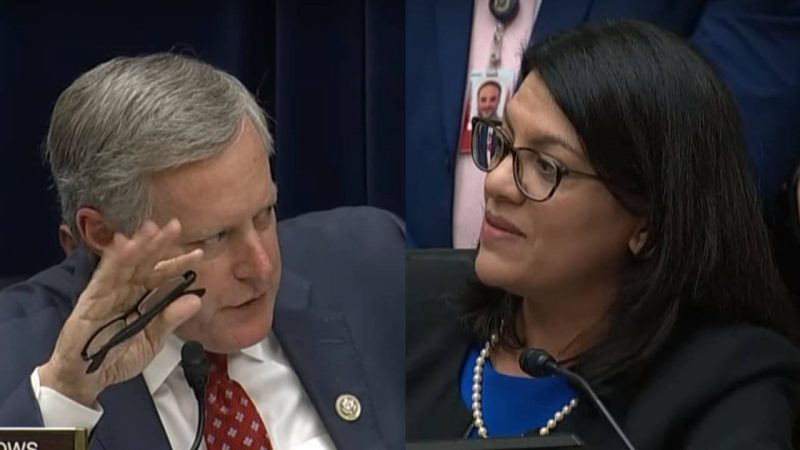 There was a battle today during the House Oversight Committee's hearing of Michael Cohen, President Trump's former attorney.

Tlaib's accusation came after Meadows invited Lynne Patton, a top Trump housing official who is black, to attend the hearing in order to push back on any accusations that Trump was racist.

"Just because someone has a person of color, a black person, working for them does not mean they aren’t racist and … the fact someone would actually use a prop, a black woman in this chamber, in this committee is alone racist in itself,” Tlaib said as she took aim at Meadows.

"Meadows, a Trump ally and head of the conservative Freedom Caucus, immediately demanded a retraction," The New York Post reported. "Getting emotional, Meadows said his nieces and nephews are people of color and he rejected any notion he’s a racist."

WATCH: This exchange at the Cohen hearing says so much about America right now https://t.co/uXNCHP1POx pic.twitter.com/hFO2TKe2El

It's so ridiculous that Tlaib is even accusing anyone of being racist when Tlaib herself is a documented racist herself.

She has promoted anti-Semitic conspiracy theories, denies the Holocaust, supports the Muslim Brotherhood, and other campaigns against Israel.

Here are some of the high points from the discussion:

Tlaib: Thank You Mr. chairman I can actually read it from here. Just to make a note Mr. chairman that just because someone has a person of color, a black person working for them, does not mean they aren't racist and it is insensitive that someone would even say racist they say it is racist in itself and to use a black woman as a prop to move to prove it otherwise and I can submit this for the record. If a colleague is thinking that that's what I'm saying, I'm just saying that's what I believed to have happened and if as a person of color in this committee that's how I felt at that moment and I wanted to express that. But I am not calling the gentleman, Mr. Meadows a racist...so I'm saying that in itself it is a racist act.

Meadows: Well I hope not Mr. chairman because I need to be clear on this particular... Mr. Chairman.

Meadows: I've defended you and false---

Meadows: Yes sir, you are.

Cummings: I will clear this up. Now Mrs. Tlaib, I want to make sure I understand, you did not, you were not intending to call Mr. meadows or racist, is that right?

Meadows: Mr. Chairman, there's nothing more personal to me than my relationship, my nieces and nephews, are people of color, not many people know that. You know that Mr. chairman and
to indicate that I asked someone who is a personal friend of the Trump family, who has worked for him, who knows this particular individual, that she's coming in to be a prop it's racist to suggest that I asked her to come in here for that reason.

Mr. President the president's own person, she's a family member and she loves this family, she came in because she felt like the President of the United States was getting falsely accused. And Mr. Chairman you are, you and I have a personal relationship that's not based on color and to even go down this direction is wrong Mr. chairman.