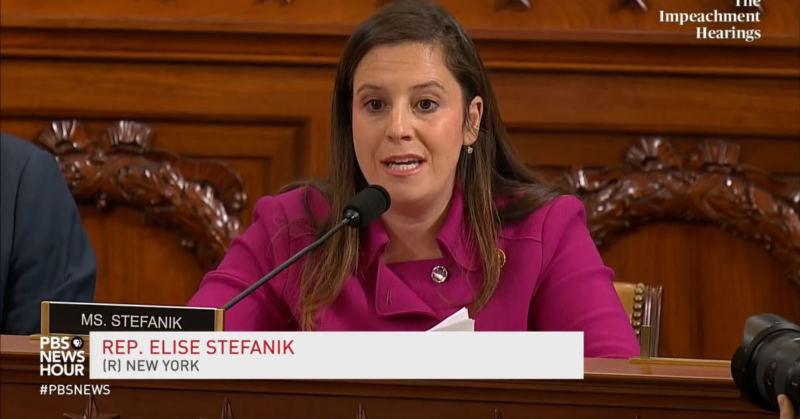 Tyrant Schiff Repeatedly Refuses To Allow Congresswoman To Speak, When She Finally Does She Kills It

During the impeachment hearing on Friday, Rep. Devin Nunes recognized and was yielding his time to another representative, Ms. Stefanik.

Shifty didn't like that so he decided not to let her speak. This entire time people have been able to recognize one another and give their time to them, but this time he wouldn't allow it to happen.

Here is how the exchange went down:

Nunes: I know Ms. Stefanik you had a few quick questions for the ambassador.  I yield to you Ms. Stefanik.

Stefanik: What is the interruption for this time?

Schiff: The gentlewoman will suspend, you’re not recognized. Mr. Nunes–

Schiff: Under the House Res. 660 you are not allowed to yield time except to counsel.

Stefanik: The ranking member to another member of Congress.

Schiff: Nope, nope. That is not accurate.

Stefanik: That is accurate. Ambassador Yovanovitch I want to thank you for being here today–

Schiff: The gentlewoman will suspend, you’re not recognized.

Schiff: The gentlewoman will suspend.

Nunes: Mr. Chair, we control the time and customary to this committee, who ever controls the time can yield to whoever they wish. If we have members of Congress who have a few questions, it seems appropriate that we would let Ms. Stefanik ask her question.

Schiff: Mr. Nunes, you or minority counsel are recognized.

Once again, Adam Schiff flat out REFUSES to let duly elected Members of Congress ask questions to the witness, simply because we are Republicans. His behavior is unacceptable and he continues to abuse his Chairmanship. Watch 📺👇 pic.twitter.com/qm9Uj8tiHO

Take another look at how tyrannical he is. He's not even allowing members of Congress to state a point of order!

How many times can Adam Schiff say “the Gentlewoman is NOT recognized”? He clearly has NO interest in letting Republicans have any say in the impeachment hearings. Watch him interrupt us multiple times and refuse to yield for our parliamentary questions👇👇 pic.twitter.com/DnudgOe5Ed

When Stefanik was finally able to speak she knocked it out of the park.

The facts are clear, confirmed by our witness, Ambassador Yovanovitch: defensive lethal aid was provided to Ukraine not by the Obama Administration, but by the Trump Administration. pic.twitter.com/QBOSFg1pMV