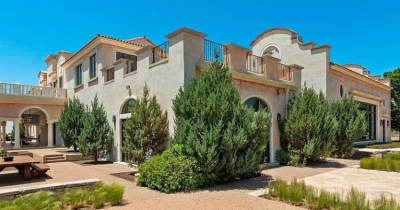 The Price Of This Amazing Home Had To Be Slashed Because Of Who Used To Live There….

The roughly 8,000-acre New Mexico ranch where convicted sex offender Jeffrey Epstein was accused of recruiting and sexually abusing multiple women before he died by suicide in 2019 is hitting the market for $27.5 million.

However, with the history of running a sex ring and famously trafficking young girls for sex favors, the property has been seen at a steep discount because no one wants the 8,000 acres of land that was previously owned by the prolific sex criminal.

The price of the 35-mile-away Zorro Ranch, which was originally listed for $27.5 million, has been dropped to $18 million.

Reports say that he intended to use the large 33,000 sq ft home as a "baby-making factory" and that many women claimed to have been raped and assaulted there while they were minors may scare away potential buyers. Several women have reported being sexually abused by Epstein at the New Mexico property.

The New York financier was never charged in the state with any crimes. Epstein died in a New York prison cell on 10 August as he awaited, without the chance of bail, his trial on sex trafficking charges. Just days before his death, two women testified in court about being assaulted at the Zorro Ranch in 2004.

One woman, identified as Jane Doe, testified in court that Epstein brought her to the New Mexico property when she was only 15 years old and that he sexually assaulted her for hours on end and stole her virginity.

Another victim, Virginia Giuffre, came forward to claim that she was also abused at the New Mexico ranch. And Giuffre also said that her sister Annie was assaulted at the ranch back in 1996 by Epstein and his coconspirator Ghislaine Maxwell, 60.

The price decrease for the estate comes only days after it was disclosed that dozens of court records connected to Epstein's contacts, including a millionaire businessman, will be made public. Despite one subject's allegation that it may "wrongfully impair (his) privacy and reputation." Judge Loretta Preska recently determined that the public interest exceeds the right to privacy and that the records should be released, Daily Mail reported.

Born and raised in New York, Epstein taught maths and physics in the city at the private Dalton School in the mid-1970s. By 1982, he had established his own company, J Epstein & Co.

The firm was an instant success, managing customer assets totaling more than $1 billion. Epstein quickly began spending his fortune, including on a mansion in Florida, a ranch in New Mexico, and rumor has it, the largest private home in New York, as well as socializing with celebrities, artists, and politicians.

Epstein kept his Zorro Ranch in New Mexico closely guarded to keep the prying eye of the law away from his nefarious acts against children and underage girls.

The home was set up to be self-sufficient so that it would never need public service from outside of the premises. The property even includes its own firehouse to protect the home against a possible outbreak of fire.

Epstein would bring VIP guests to the New Mexico ranch several times throughout the year. He would then help them abuse underage girls, according to urban legend.