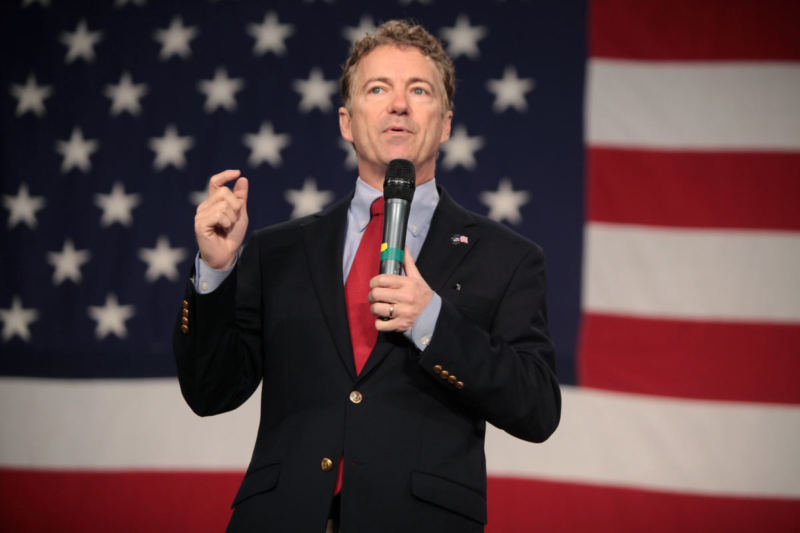 When Waters asked what Paul planned to do about the DGB the senator responded bluntly. “We’re going to shut it down,” he said. Paul noted that he is collecting signatures from other senators for this purpose, and hopes to get a vote about defunding the board. “So much for the marketplace of ideas,” Paul said. “They have decided that they’re going to determine what disinformation is.”

Let's not forget how Democrats spent millions trying to find a link between Trump and Russia. Cnn spent years telling that tale and never retracted it. Paul noted, "If they can’t admit that that’s disinformation – it was propagated by CNN for years and years … how could they possibly do the job of policing disinformation?”

In fact, Paul said, he does not support anyone policing information. “Even if you could [do it], and they admitted that it was disinformation, I’d be against policing CNN. People can turn the channel.” The senator said the public can filter its own information.

Waters played a recent clip of Fauci condemning the “normalization of untruths.” Ironically, Fauci has been a basin from which many untruths have poured. As far as normalizing them, one of Fauci's many lies was that cloth masks work. We now know that it was a lie told because the wealthy were afraid the effective masks would be bought up—Where are the repercussions for that lie?

There are none. Those lies have become so normal that we joke about them. SNL did a whole skit about it.

Paul responded, “[I]t’s the same argument as the disinformation board, ‘we have to decide what is true and what is not true.’” The senator listed some statements Fauci made that  got discredited after he spoke them, including the effectiveness of masking. “I think that Doctor  Fauci has promulgated untruth,” Paul said. ”He has normalized untruth.”

“[Fauci said] booster vaccines should be given to adolescents. There’s now a significant amount of scientific data and studies, including large, multimillion-person studies, showing that you have an increased risk for an inflammation of the heart the more vaccines you give young people,” Paul said. “We combine that with the fact that seventy-five percent of young people have already been infected. He discounts this completely.”

The senator brought the discussion of Fauci full circle. “The biggest purveyor, I think, of untruths right now in public health is Doctor  Fauci. So when someone says, ‘we’re going to stop disinformation’—well, they can’t even agree to what the truth is.”

Public debate is essential, according to Paul. “Scientists debate, journalists debate, politicians debate—we arrive at the truth through disputation,” he said. “Anybody who says we can do it by edict is somebody completely unaware of the idea and the concept of freedom of speech.”

The fact is, free people have the choice to walk away, turn the channel, and shun information they know to be untrue. If we start allowing the government to decide what is 'true' we can no longer trust the information nor call ourselves 'free'.

I agree with Paul, I can't stand CNN because they have lied so much over the years while claiming to be the 'most trusted new source', but I wouldn't want them regulated by a government agency. Basically, I wouldn't want to live somewhere like North Korea, China, or Russia where all of our information comes from state TV. That's terrifying.