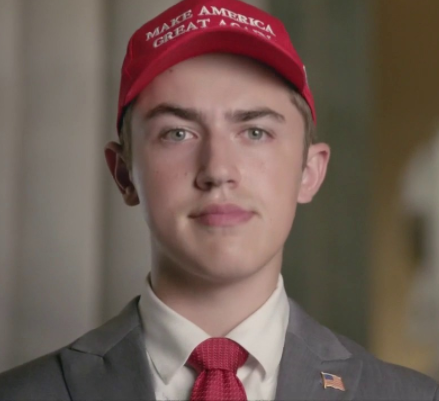 Nicholas Sandmann arrived at the Abraham Lincon Memorial with his classmates wearing his MAGA hat and was forced to stand there awkwardly as a man banged a drum in his face while being recorded for no good reason. Later he would find out that media had created a monstrous view of him.

Sandmann recently spoke out, letting the public know his side of things, hopefully, to cool down the constant mockery he received on media. The teenager goes to explain that he had his hands behind his back and kept quiet so not to cause any more agitation from the aggressors and that "smug" smile was nothing more than an awkward nervous grin from being stuck in an uncomfortable situation.

Sandmann recalled being "shocked and speechless" when he found out about the narrative the media was pushing on the bus ride back to Kentucky at 3 a.m., saying he simply bought a MAGA hat because he wanted to show support for President Trump, "one of the most pro-life presidents we've ever had." - source FoxNews

"This is a media that completely ignored video online about the entire incident, and instead crafted the exact opposite that I walked up to Mr. Phillips, which isn't true. It was never true, and someone had to do something about it." Sandmann said on FoxNews.

"I wasn't treated like a kid" he replied. This whole incident started off with a school field trip that went to join a pro-life march. He did not originally have the MAGA hat and only bought it has he mentions, President Trump, is the most pro-life president he knows. News slandered him claiming he and his classmates approached the drum playing man when it was in fact the other way around, and no matter how much proof was provided the media ignored it.

After his successful lawsuits against media platforms for defaming him, he received an undisclosed amount of cash as a prize for his "personal win", Sandmann is now planning to become a lawyer to protect those from what he had to suffer through. The media needs to start being held accountable for the lies they spread for the sake of a juicy story.