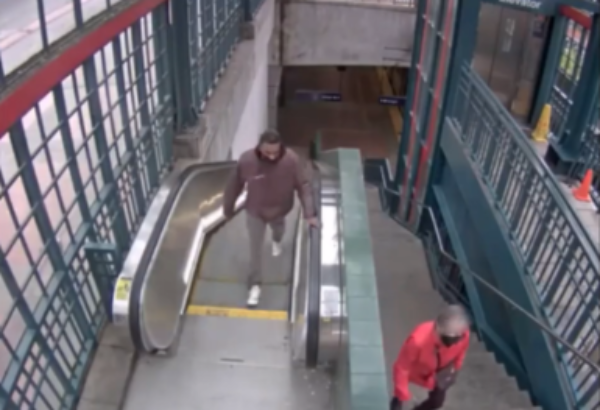 I bet you can guess that this horrific attack happened in a big fat blue city. If you did, you would be right. In Seattle Washington, where locals struggle to deal with rising crime and massive homeless tent cities—Another homeless man with a long criminal history attacked a nurse as she tried to make her shift.

Kim Hayes, 62, was on her way to work at Harborview Medical Center around noon on March 2 when the brutal attack took place at the Chinatown-International District station near downtown.

As the longtime health worker was walking up the stairs, she was grabbed by Alexander Jay, 40, and thrown back down the cement steps, according to court documents obtained by DailyMail.

The nurse suffered a broken clavicle and three broken ribs. She was rushed to the hospital where she has worked for 25 years, receiving surgery from her colleagues.

According to DailyMail, Jay has been convicted 22 times in Washington state and California, including on charges of burglary, theft, selling stolen property, drug possession, auto theft, and multiple counts of domestic violence. He was most recently convicted in 2021 of a residential burglary.

Meanwhile, he has been issued more than 15 bench warrants since 2016 by Washington courts for his failure to attend court hearings.

In the video, you can see Jay calmly walk up the escalator and as the nurse approaches the stairs. He then attacks her without warning, throwing the nurse down the stairs several times and striking her. Almost as infuriating as the attack, is the two grown men who witness the assault but do nothing.

Luckily, however, the victim got a good look at Jay.

“The male who assaulted her was in the same car on the light rail train with her, facing her,” a detective writes in the probable cause certificate. “She was standing, and he was seated. They had no interaction or confrontation. He continued to pull his mask down while on the light rail, and she got a good look at his face. The cross [tattoo] on his face stood out to her, and she recognized him as the same male who later assaulted her.”

I want to warn you the video is graphic:

NEW: Prosecutors allege prolific offender Alexander Jay randomly attacked a nurse as she exited a light rail station in Seattle. She broke 3 ribs & her clavicle. Police say Jay is homeless. He has at least 22 convictions to his name.

Jay was arrested the following day after police released surveillance footage of the attack. The homeless man is well known in the area and was identified immediately.