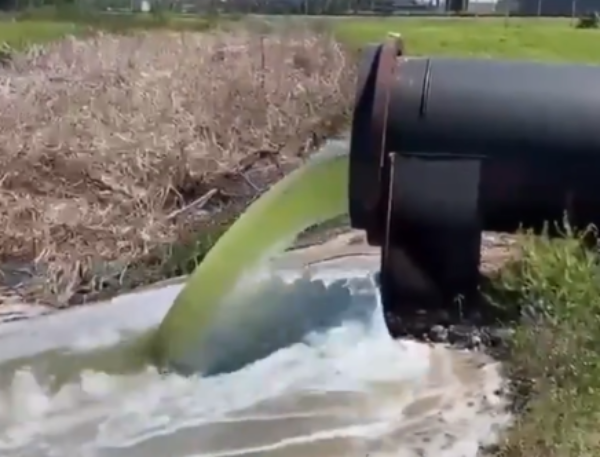 Florida is in quite the pickle as a pond of acidic water, which was earlier claimed to possibly be radioactive, has a leak and they can't patch it. The Governor has declared a state of emergency and people are being evacuated from the area. They claim the ponds have 480 million gallons of waster water that could decimate the local area if released all at once.

“Our first priority is public health and safety. Teams on the ground are laser-focused on addressing this issue, and I have directed Secretary Valenstein to work with Manatee County and utilize all available resources to form a permanent solution to this longstanding issue,” said Governor DeSantis. “I have also deployed the National Guard and they are in the process of dropping off additional pumps via aircraft on top of the berms, to help decrease the water levels in the Piney Point reservoir at an even faster pace. The State is committed to holding HRK and all involved parties accountable.”

“Our teams are working around the clock to mitigate risks and ensure emergency preparedness in the area that could experience flooding, should an uncontrolled breach occur. It is clear that this facility must be closed. I want to assure Floridians that we are dedicated to holding HRK accountable for this issue through enforcement action,” said DEP Secretary Noah Valenstein.

“At the division, we are sending every resource at our disposal to the site by truck, crane and helicopter. We have already deployed 20 pumps, 10 vacuum trucks and more than 100,000 bottles of water, with more on the way. I urge residents in the area to follow all warnings and evacuation orders from local officials as we do everything we can to keep you safe,” said FDEM Director Jared Moskowitz."

TOXIC LEAK: Residents near Piney Point retention pond in Manatee County, Florida were evacuated on Saturday as officials fear an "imminent" collapse of a local wastewater reservoir contaminated with material that could be radioactive. https://t.co/phrXuNUqdg pic.twitter.com/dQ9RCkYYBA

"The leak in the containment wall was discovered about a week ago, and residents in the area were evacuated on Thursday, officials said.

On Friday, crews worked overnight in an attempt to fix the leak, but those attempts were unsuccessful, Sauer said.
He said a portion of the containment wall at the leak site had shifted laterally, and on-site engineers deemed the situation to be escalating, and all command staff and residents were told to evacuate.
Those two ponds hold "waste that would be less conducive to life on land and ... life in the sea," Hopes said, without elaborating on the specific waste material."

"Officials are reportedly most concerned about potential flooding, and said that the water is only "slightly acidic."

"The water meets water quality standards for marine waters with the exception of pH, total phosphorous, total nitrogen, and total ammonia nitrogen. It is slightly acidic, but not at a level that is expected to be a concern, nor is it expected to be toxic."

They have also claimed the water has small amounts of uranium and radium. It's hard to say what is actually going on as the response seems more fitting for a radioactive pond than just slightly acidic wastewater... But either way, it seems they are taking the situation seriously and will hopefully have this handled before it floods the surrounding area.