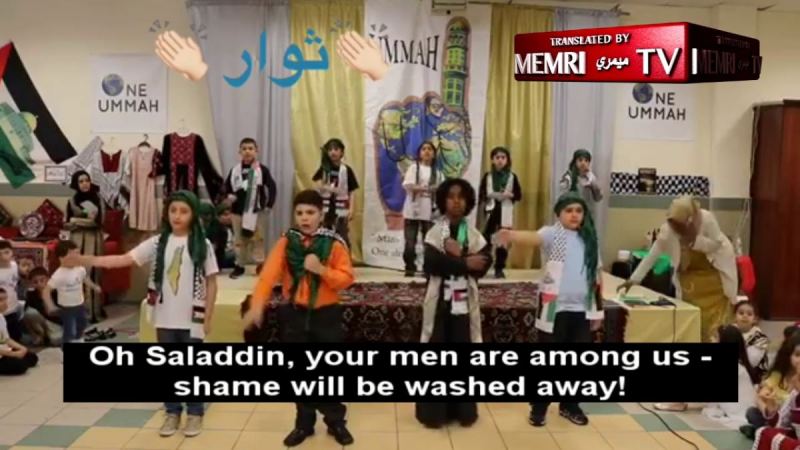 Here is another fine example of how Islam is NOT a religion of peace.

This video is just shocking!

At a Muslim center in the United States of America, a group of Muslim children is being taught to "chop off heads" of rebels and cowards in the name of Allah.

Disturbing footage of Muslim kids saying they would sacrifice themselves and kill for the "army of Allah" surfaced from an Islamic center in Philadelphia.

The Muslim American Society (MAS) Islamic Center in Philadelphia posted the video to its Facebook page celebrating "Ummah Day" in which young children wearing Palestinian scarves sang and read poetry about killing for Allah and the mosque in Jerusalem.

"These are not isolated incidents; they are happening in major centers of the country – including in Pennsylvania," MEMRI said in a statement.

How is it that CNN continued to spread lie after lie about the Covington Catholic School students, but they don't even hint at this story at all? Is it because it would portray Islam in a negative light? Well, it should be! Read the Qur'an for yourself and see what they actually believe.

Do you know what I'm waiting for now? Representative Ilhan Omar to come out and defend this video and this organization in some fashion.

Children in Philadelphia Muslim Society: We Will Sacrifice Ourselves for Al-Aqsa; Will Chop off Their Heads, Subject Them to Eternal Torture pic.twitter.com/6ySfz0Ylel

And can I just add how this is exactly what people are complaining about in regards to the bias from social media, in this case, Twitter?

They will censor almost anything a conservative says, but now here is a clear cut example of Muslim children being indoctrinated to sacrifice themselves and chop off people's heads, and Twitter doesn't bat an eye at it?

This is in America. This is in Philadelphia! Not Iran, not Afghanistan, not any other Middle East country...this is happening here at home!