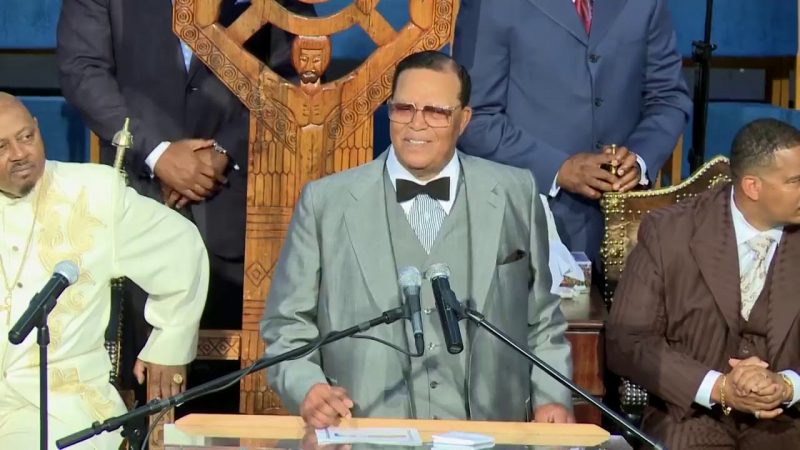 The leader of the Nation of Islam, Louis Farrakhan who is known for his anti-American and anti-Semite comments took things to a whole new level recently.

During the Nation of Islam's Saviours' Day keynote speech in Chicago, Farrakhan said something incredibly shocking and blasphemous.

"God does not love this world. God never sent Jesus to die for this world. Jesus died because he was 2,000 years too soon to bring about the end of the civilization of the Jews. He never was on a cross, there was no Calvary for that Jesus.

Early one Saturday morning our savior taught us, when he found out he was 2,000 years too soon to end the civilization of the Jews, He decided that he would give his life for the truth that he taught, that His name would live, until the one that he prefigured came into existence. And that’s why the Koran says Jesus and his mother Mary were a sign.

Jesus didn’t die on Calvary; he died in front of an old Jew’s store that was boarded up, and the Roman soldiers came to get him."

He further went on to say,

"The real story is what I tried to tell you from the beginning. It didn’t happen back there. It’s happening right while you’re alive looking at it," Farrakhan told the audience. "I represent the Messiah. I represent the Jesus and I am that Jesus. If I am not, take my life."

"Some of you do today reject because the white man told you I’m an evil man, I’m a hater, I’m an anti-Semite. I hate Jewish people, I hate gay people. Here I am in front of you. I represent the Jesus that saves. I don’t represent somebody that came to judge you and me for our errors and mistakes…Everywhere I went I found myself rejected. My black people, they accepted me. But now white people are frightening the hell out of black people. College presidents are punished for allowing me or anyone that represents me to come on the college campus because they fear what’s in my mouth from my teacher the Honorable Elijah Muhammad."

It's quite clear, Louis Farrakhan's comments fly in the face of the most well-known verse in the Bible, John 3:16 which says, "For God so loved the world that he gave his only begotten son, that whosoever believes in Him shall not perish, but have eternal life."

May God be glorified and Louise Farrakhan humbled.