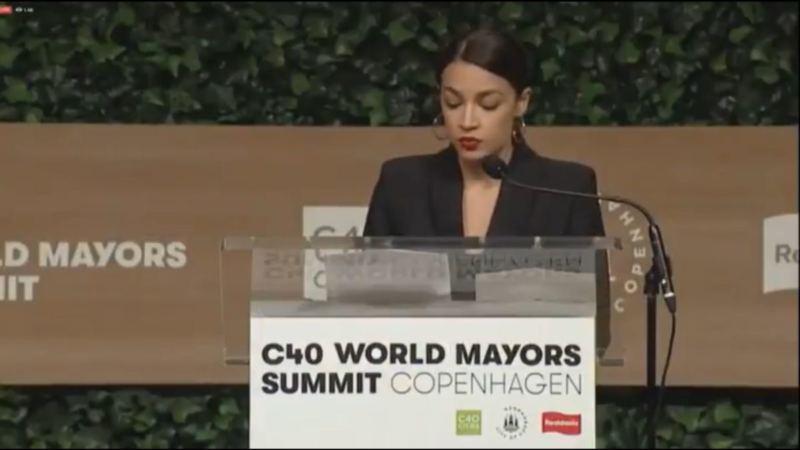 During a keynote speech at the C40 World Mayors Summit, Alexandria Ocasio-Cortez put on a show once again to try and prove how terrible climate change really is.

“I speak to you not as an elected official or a public figure, but I speak to you as a human being. A woman whose dreams of motherhood now taste bittersweet, because of what I know about our children's future," she said trying her best to give the appearance that she was holding back tears.

Ocasio-Cortez is already known for staging events and faking strong emotions for the sake of self-righteousness.

Remember the time where she faked crying at the border earlier this year? The photographer who took them admitted that they were even old photos.

.@AOC, near tears: My dreams of motherhood "now tastes bittersweet" because of global warming pic.twitter.com/hwNUSxtp3l

She also blamed climate change for killing 3,000 people in Puerto Rico in 2017:

"I speak to you as daughter and descendant of colonized peoples who have already begun to suffer. Just two years ago one of the deadliest disasters in the United States struck in the form of Hurricane Maria."

"The climate change-powered storm killed over 3,000 Puerto Ricans, American citizens -- my own grandfather died in the aftermath -- all because they were living under colonial rule, which contributed to the dire conditions and lack of recovery.”

She's always careful to mention that it was the "aftermath" of the hurricane and not because of the hurricane. In what way did he die as a result of the aftermath? Probably, natural causes.

We should at least be thankful that she's not planning on procreating and brainwashing more people to believe her idiotic schemes.