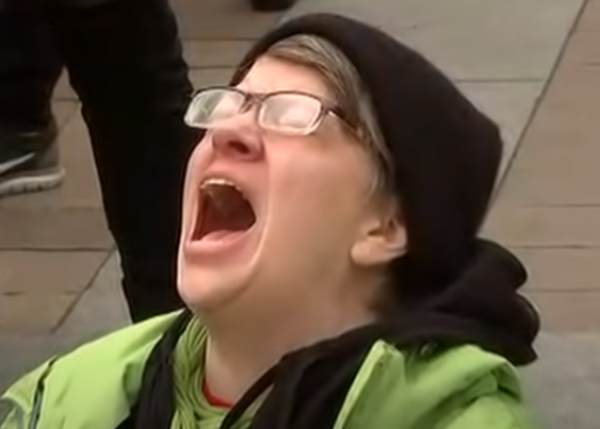 What's really scary about the story is the setting. This is a college campus, a place that is supposed to be about learning. So you'd think there would be a voice of reason somewhere in the vicinity. But no, the University of Wisconsin-Madison proved there were no signs of intelligent life in the area when they paid $50k to remove a supposedly racist boulder.

"Last November, students testified that the rock was a daily reminder of past and present injustices faced by students of color. Chancellor Rebecca Blank accepted the recommendation. The Wisconsin Black Student Union, in partnership with the Native American student organization Wunk Sheek, endorsed its removal..."

"It took courage and commitment for the Wisconsin Black Student Union to bring this issue forward and to influence change alongside UW’s Wunk Sheek student leaders," said Vice Chancellor for Student Affairs Lori Reesor. "In the midst of demands for justice following George Floyd’s murder last summer, the students wanted change on campus, and they worked hard to see this through. While the decision required compromise, I’m proud of the student leaders and the collaboration it took to get here."

The rock, dated nearly two billion years old, is a rare example of a pre-Cambrian era glacial erratic. It was a monument in honor of Thomas Chamberlin, a geologist who served as president of the university from 1887 to 1892.
The plaque honoring Chamberlain was also removed from the rock, which will no longer be referred to by this name. Instead, it will be known as a glacial erratic. A new plaque honoring Chamberlin will be placed in Chamberlin Hall.
UW–Madison historians could not find evidence that the racist term attached to the rock in the 1925 newspaper article was used in any capacity by the university. But they note that the Ku Klux Klan was a pervasive presence in the Madison area in the early part of the last century. People of color were often mocked in minstrel shows at campus facilities and campus satirical periodicals."

Watch Them Takeaway The Biggotted Rock Below.

They spent $50k moving a rock when there is nothing slightly racist about it. They are just assuming that there must be something racist about it. This is people complaining about nothing and then wasting thousands of dollars just for fun. I guess this shows what an education in America looks like these days, and that's just sad.