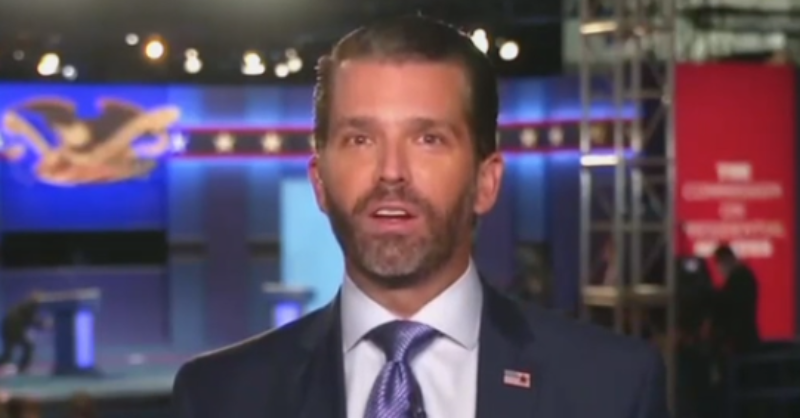 Donald Trump, Jr. posted a video of himself going off following the politicization that followed the school shooting in Uvalde, Texas. A visibly outraged Don. Jr. blasted the left for ignoring reality and the GOP for being too afraid to stand up against the left's push for more gun control.

“It’s the gun, it’s not the sociopath wielding it, folks,” he said in a video posted to Rumble. “If it wasn’t for the gun, this kid would be a well-adjusted, reasonable individual, he’d be a wonderful human being, right?”

“He wouldn’t have done the exact same thing with a bat or a bomb or some sort of improvised device or a machete, he’s a great kid, don’t judge him,” he said.

Don Jr. Slammed politicians for pretending that the 18-year-old suspect, who murdered 19 children and 2 teachers, would to have done so if he didn't have a gun.

“We can’t acknowledge what the actual causes are, it’s not a drug-addict mother and a missing father and a lack of religion, indoctrination programs in our schools, crazy teachers teaching some of the crap I’ve talking about in these videos. It’s none of those things,” he said. “It never ends man.”

“Our own stupidity, apathy, wokeness, laziness, that’s the problem, folks, and until we fix that, the rest is just talk and crap,” he said.

Trump, Jr. said, “no one can admit somebody is actually a piece of garbage and screwed up.”

Junior went on a wild rant about Uvalde tonight, saying the AR-15 isn’t the issue because he could’ve done the “exact same thing” with a bat, bomb or machete. He says gun owners are unfairly “stigmatatized,” and the real problem is that “crazy teachers” are indoctrinating kids. pic.twitter.com/2Rmme3510A

Last Tuesday, on May 24, 18-year-old Salvador Rolando Ramos fatally shot nineteen students and two teachers and wounded seventeen other people at Robb Elementary School in Uvalde, Texas, United States. This came after he shot his grandmother in the forehead at home, severely wounding her.

Law enforcement officials were criticized for their actions in response to the shooting, and their conduct is being reviewed in separate investigations by the Texas Ranger Division and the United States Department of Justice. After initially praising first responders to the shooting, Texas Governor Greg Abbott called for an investigation of the lack of action by incident commanders. Police officers waited 78 minutes on-site before breaching the classroom to engage the shooter.