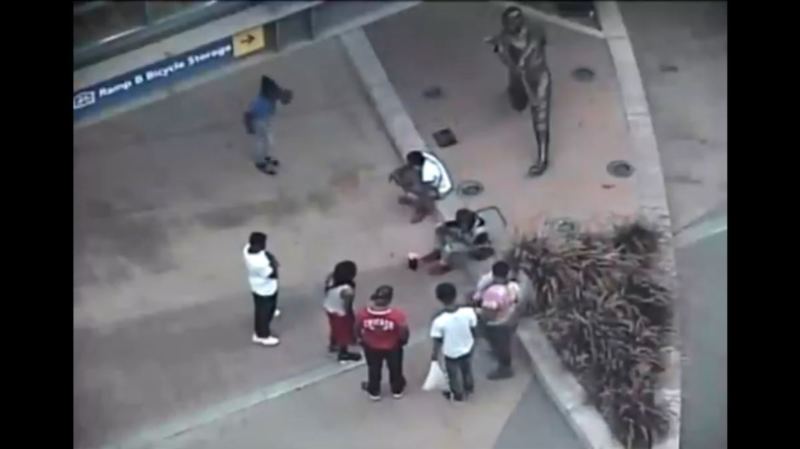 WATCH: Horrifying Attack In Ilhan Omar’s District By Her Own People

Ilhan Omar's congressional district is in very sad shape and crime has overrun the city.

But it's not just any regular street thugs we're talking about. These are Somali refugees. Men (and a woman) who came from Somalia and have joined terrorist organizations.

Police recently arrested 16 individuals in connection with a violent crime ring that has overtaken Minneapolis. A number of incidents have actually been caught on video.

According to a report provided by Minneapolis police, a sweep conducted two weeks ago ended with police arresting 16 people between the ages of 13 and 25.

Int the video below, you will see these men rob him of his phone, strip him naked, punch and kick him, spit on him, bodyslam him, jump on his chest, whip him with a belt, ride over him with a bicycle, and throw garbage at him. He's truly fortunate to have escaped with his life.

The suspects were mostly boys and men, with a female sometimes present. They would "finesse" the victim — looking for an easy target, such as someone who was intoxicated and alone, looking at their cellphone at times. Elder said half of the assailants are juveniles.

One of the incidents happened on Aug. 3 near Target Field. According to the criminal complaint, the footage shows approximately 12 males attempting to take a cellphone from a male victim, viciously beating him. The suspects are seen ripping the victim's shoes and pants off and then going through his pockets. The victim is noted to be punched and kicked in the head several times throughout the altercation. At one point, the complaint states the victim is thrown to the ground — left motionless — then repeatedly jumped on, hit with planting pots and ridden over with a bicycle. Once police arrived, the victim and all suspects involved are gone.

In one daytime video, a mob can be seen pummeling a man just outside of the Minneapolis Twins’ stadium. At one point, the attackers run to gain speed and jump on the victim. They ride a bike over him, take off his pants and beat him with a belt. The victim appears to defend himself but is outnumbered and overpowered.

In another gruesome video, two young men appear to be attacked. They’re punched in the face and appear to fight back. One is knocked unconscious.

In a third video, a young man is surrounded by a mob and beaten unconscious. The video appears to show something being taken from his pocket once he’s on the ground.

All of these videos are emerging as the city of Minneapolis is dealing with a crippling shortage of police officers. The chief of police, Medaria Arradondo, has requested 400 additional officers over the next few years to make up for the shortage.