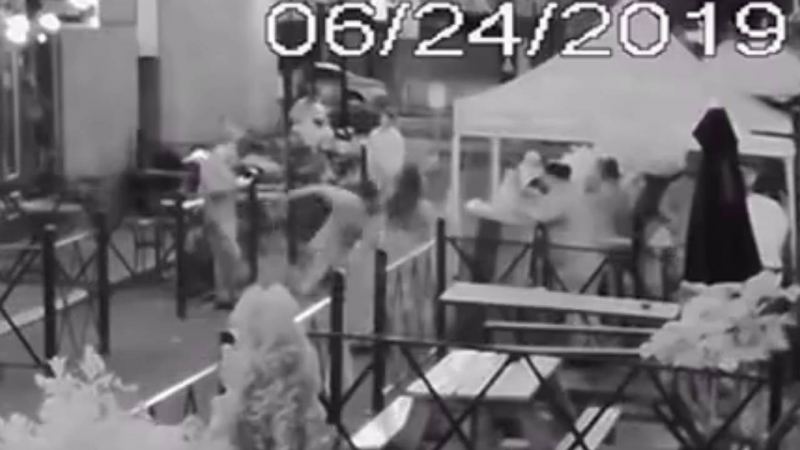 Last week a black man approached a white woman and punched her multiple times in the face.

According to LiveLeak this happened this week in Portland, Ore. with absolutely no media coverage. Steps away from the iconic Voodoo Doughnut in downtown, a man suddenly attacks a woman. Her eye socket was ”crushed,” says a source. The man was only charged with a misdemeanor & released without having to pay bail.

So what provoked the attack?

From what is being reported...nothing.

The attack apparently came out of nowhere. He was dancing to some loud music, the girl looked over in his direction then started talking to a bouncer. The next thing that happened is the man swung at her as hard as he could.

According to Dailymail.co.uk (at least the UK will report on it),

The footage, shows the woman walking towards the walkway and reaching over to a nearby bouncer shortly before the apparent attack.

The man, allegedly Bertrand, continuously crosses his arms in front of his body and appears to wait until the woman looked away before striking her in the back of her head.

A second hit to her face causes her to fall into the arms of a man nearby.

As men nearby surround the woman, the attacker jumps around on the ground before walking away.

You know what's really shameful about this is that not a single one of these men stepped up to apprehend or confront the man after he did this. Everyone just let him walk away.

There has been an increasing amount of violence being reported in Portland lately. Especially with the Antifa riots currently going on in the city.

Daniel Tuski Bertrand, the assailant, was later arrested and charged with 4th-degree misdemeanor assault. I think he deserves worse than that, but Portland is what it is.

Back in March, he was also arrested for trespassing and possession of meth.