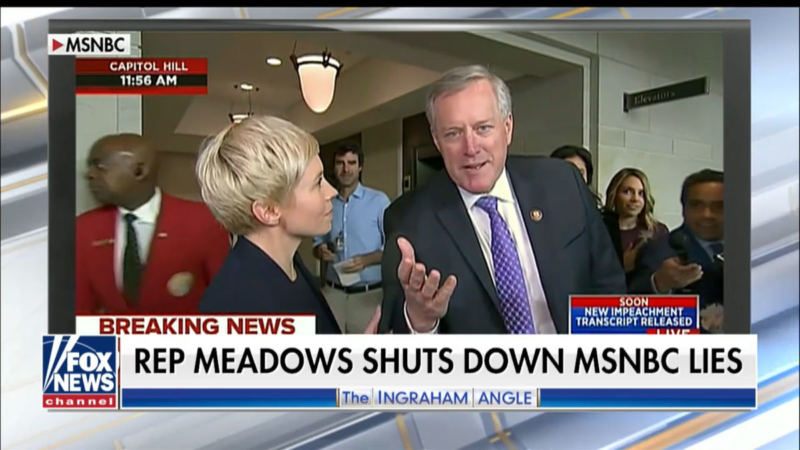 Rep. Meadows Shuts Down MSNBC Reporter After Getting Caught On Video in Anti-Republican Bias

Leigh Ann Caldwell, an MSNBC journalist, was caught red-handed exhibiting her staunch anti-Republican bias when she was trying to interview Rep. Mark Meadows as he walked by.

Charlie Kirk from Turning Point USA later appeared on "The Ingraham Angle" and spoke on the incident. Jeanine Pirro asked, "Where would she even get that from?" to which Kirk replied, "What I love is, just say, 'Are you struggling?' You don't have to tell the congressman what is going on because you're the journalist. It's as if he caught them in their own bias in real time. God bless Mark Meadows, God bless Jim Jordan and that whole team that's been fighting so hard."

Kirk continued, "But it's so funny. She's telling him what's going on while he's the story and she's supposed to be telling the story."

Additionally, Jeffrey Lord was on the program as well and Pirro asked him about if anyone, especially the President is struggling to which he told Pirro that he wasn't at all.

American Spectator contributing editor Jeffrey Lord added that he and some colleagues recently visited Trump and found him to be in good spirits -- and not appearing as concerned about impeachment as some Trump critics believe.

"He passionately believes in the American people. ... He was terrific when I saw him."

Here's the truth of the matter: The Democrats don't have a solid case against the President and they have a difficult time putting two and two together so they just call it five anyways. On the other hand, the GOP are easily going to be able to provide real facts to keep anything bad from happening to the President, because believe me, if he had done something wrong, guys like Mark Meadows and Jim Jordan would have no problem joining the Democrats against the President.