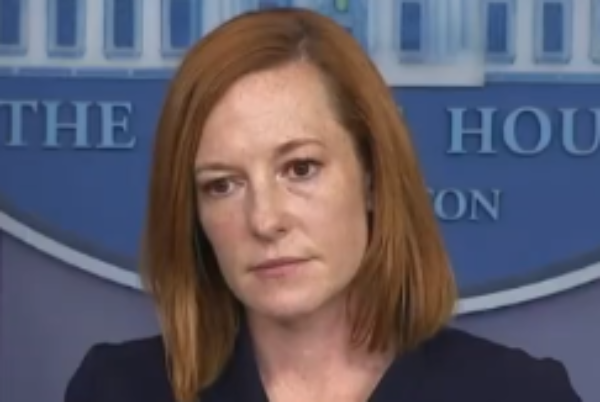 White House Press Secretary Jen Psaki is on her way out and likely on to a cushy contributor position so she's showing out to get attention from all of the big networks. For a second time, Psaki breaks out with a tearless cry over what the left calls the 'don't say gay' law in Florida. The bill protects children from liberal grooming practices and gives parents the choice to discuss sexuality with their own children, privately.

In another interview, this time with Jessica Yellin of the News Not Noise podcast, Psaki discussed what she referred to as "political games" and "harsh and cruel attempts at laws or laws that we're seeing in some states like Florida," which she claimed, "are not a reflection of the country moving to oppose LGBTQ+ communities."

"This is a political wedge issue," Psaki continued, claiming it was "an attempt to win a culture war, and they're doing that in a way that is harsh and cruel to a community of kids, especially," before becoming a tearful wreck and doubling down on her lamenting that "it's horrible, but, you know, it's like kids, who are bullied and just all these leaders are taking steps to hurt them and hurt their lives and hurt their families and you look at some of these laws in these states and they're just going after parents who are in loving relationships, who have kids. It's completely outrageous, um, but it is a wedge issue."

Psaki did aptly point out that "this is an issue that makes me completely crazy."

Psaki's predecessor, Kayleigh McEnany, who was press secretary under the Trump administration, fired back at Psaki saying that [she] "should cry about the 62 million children that do not exist, that have been aborted because of Roe v. Wade, a heinous, heinous decision in this country that has exterminated about one-fifth of the United States population." McEnany continued by suggesting that "if you want to cry, don't cry about forcing sexuality on kindergartners. That is sick. Cry about the 62 million children who can't even go to kindergarten."

Kayleigh calls on Psaki to cry about children that “do not exist” because they were aborted pic.twitter.com/4Ti36EZIwa

Learning that one-fifth or 62 million children were demolished by Roe v Wade should be enough to make anyone question the use of the Supreme Court ruling, but not Democrats. Those children don't matter because they don't fit their agenda.