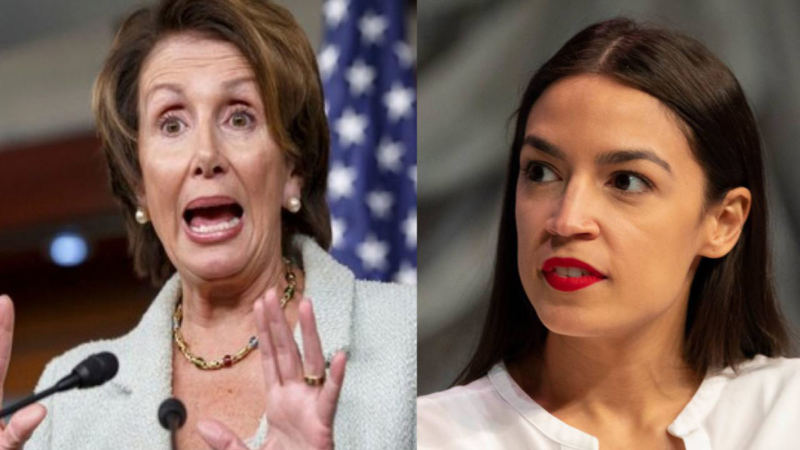 Ocasio-Cortez Takes Aim At Dems and Pelosi Over Impeachment: They Fire Right Back

Alexandria Ocasio-Cortez has reopened that can which contains all the disagreement between her and the "squad" and Speaker of the House Nancy Pelosi over impeaching President Trump.

She has once again lashed out against her fellow Democrats who aren't rushing blindly to impeach the President, including Nancy Pelosi again.

A true civil war between Ocasio-Cortez and Pelosi, who sets the priorities for the Democratic caucus and has largely locked Ocasio-Cortez and her progressive colleagues out of the Congressional agenda, threatened to explode over the summer, as the two lawmakers traded barbs on Twitter over everything from impeachment to a spending bill designed to relieve the pressure on border patrol and fund efforts to house and feed asylum-seekers crowding border detention facilities.

AOC's comments show how stupid she is. Truth be told, if there was any way for her to force this impeachment process to go forward, she would lose her seat in the House of Representatives with 100% certainty, because it is ultimately going to fail.

There is no evidence of any impeachable offenses. Nancy Pelosi knows this and this is why she isn't rushing to impeachment. There are no solid facts and this isn't just a simple thing.

Pelosi can raise hell about Brett Kavanaugh or things that Donald Trump says or does, but when it comes to this one thing, it's serious and could cause much more division, or worse for the Democrats, cost them the majority in the House.