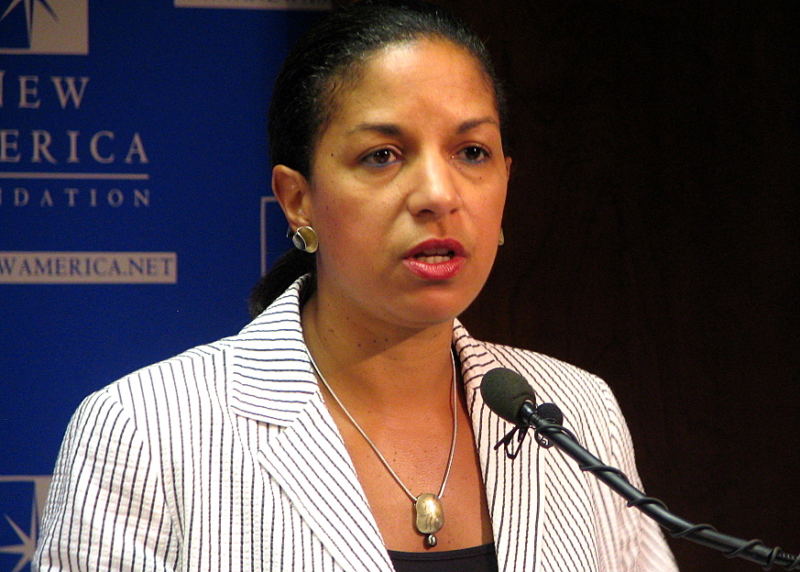 Prior to leaving her position in the White House, Susan Rice wrote a very interesting email to herself at the exact same time that Donald Trump was being inaugurated on January 20, 2017.

So the question must be asked, why is it that immediately before leaving the White House would she be sending an email memorializing a meeting that took place two weeks prior?

The email Susan Rice sent to herself and Curtis Ried said,

On January 5, following a briefing by IC leadership on Russian hacking during the 2016 Presidential election, President Obama had a brief follow-on conversation with FBI Director Jim Comey and Deputy Attorney General Sally Yates in the Oval Office. Vice President Biden and I were also present.

President Obama began the conversation by stressing his continued commitment to ensuring that every aspect of this issue is handled by the Intelligence and law enforcement communities "by the book". The President stressed that he is not asking about, initiating or instructing anything from a law enforcement perspective. He reiterated that our law enforcement team needs to proceed as it normally would by the book.

From a national security perspective, however, President Obama said he wants to be sure that, as we engage with the incoming team, we are mindful to ascertain if there is any reason that we cannot share information fully as it relates to Russia.

The President asked Comey to inform him if anything changes in the next few weeks that should affect how we share classified information with the incoming team. Comey said he would.

Following this, Senators Chuck Grassley and Lindsey Graham, sent a letter to Obama’s National Security Adviser, Susan Rice asking her about the strange timing of the email:

“It strikes us odd that, among your activities in the final moments on the final day of the Obama administration, you would feel the need to send yourself such an unusual email purporting to document a conversation involving President Obama and his interactions with the FBI regarding the Trump/Russia investigation. In addition, despite your claim that President Obama repeatedly told Mr. Comey to proceed "by the book", substantial questions have arisen about whether officials at the FBI, as well as the Justice Department and State Department, actually did proceed "by the book."

They then followed up with Rice asking her twelve questions about her email. Some questions she answered, some she didn't. But she has definitely lawyered up.

Question 1. Did you send the email attached to this letter to yourself? Do you have any reason to dispute the timestamp of the email?

Question 2. When did you first become aware of the FBI’s investigation into allegations of collusion between Mr. Trump’s associates and Russia?

Question 3. When did you become aware of any surveillance activities, including FISA applications, undertaken by the FBI in conducting that investigation? At the time you wrote this email to yourself, were you aware of either the October 2016 FISA application for surveillance of Carter Page or the January 2017 renewal?

Question 4. Did anyone instruct, request, suggest, or imply that you should send yourself the aforementioned Inauguration Day email memorializing President Obama’s meeting with Mr. Comey about the Trump/Russia investigation? If so, who and why?

Question 5. Is the account of the January 5, 2017 meeting presented in your email accurate? Did you omit any other portions of the conversation?

Question 6. Other than that email, did you document the January 5, 2017 meeting in any way, such as contemporaneous notes or a formal memo? To the best of your knowledge, did anyone else at that meeting take notes or otherwise memorialize the meeting?

Question 7. During the meeting, did Mr. Comey or Ms. Yates mention potential press coverage of the Steele dossier? If so, what did they say?

Answered narrowly (“In the conversation Ambassador Rice documented, there was no discussion of Christopher Steele or the Steele dossier, contrary to the suggestion in your letter”).

Question 8. During the meeting, did Mr. Comey describe the status of the FBI’s relationship with Mr. Steele, or the basis for that status?

Question 9. When and how did you first become aware of the allegations made by Christopher Steele?

Question 10. When and how did you first become aware that the Clinton Campaign and the Democratic National Committee funded Mr. Steele’s efforts?

Question 12. Did President Obama have any other meetings with Mr. Comey, Ms. Yates, or other government officials about the FBI’ s investigation of allegations of collusion between Trump associates and Russia? If so, when did these occur, who participated, and what was discussed?