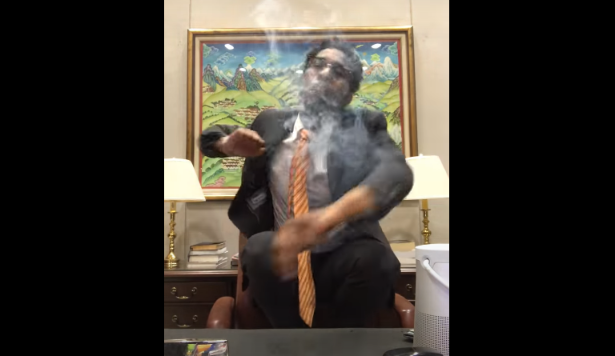 Must Watch: Feinstein Fires Her Top Aide For Telling The Truth, He Gets Even In The BEST Way!

Sen Feinstein thought she had the last laugh after firing her long-time aide, Jamarcus Purely. The aide slammed his employer saying that she “cares more about her dog than black people.”. So, basically, Feinstein fired her aide for telling the truth.

Purely found a way to get even with Feinstein by recording himself smoking weed in her office while reportedly high on shrooms. Then he tells LatinoRebels.com:

“I ate some shrooms thinking they had won. While I was on the shrooms I came to the realization of what I had to do. I put on a suit because the walls in Congress aren’t real if you wear a suit. I had just bought some Jordans the day before. I was happy as f–k. When Instagram (banned) my post I was angry. But I knew what I had to do. I had one last thing I had to do. So I took off my Jordans, took off my hoodie. I ironed my suit. I felt like I was in a f—king movie. I walked to the Hill. I was standing in front of the Capitol. My heart is racing. I had a joint in my pocket. I’m talking to cops. It made no sense to anyone but me, on shrooms. I put on some trap music. I thought of my family. I looked at my sister—she’s my screensaver on my phone. She puts up with so much s–t as a Black woman. I knew no one would ever know the s–t Feinstein does to Black people if I didn’t make it impossible to ignore....

So I walk in her office, Feinstein’s office, which triggered a screaming white noise sound. I had only been in her actual office like twice in five years and I couldn’t figure out how to turn off the white noise sound. It was giving me so much anxiety because it sounded like when the cops show up. So then I was like, f–k it. I just gotta do something for 10 minutes and I can finally leave. So I’d brought my Bose speaker. I used her bathroom, then I go sit at her desk. I turn on my speaker and start the music. I start smoking that joint, an afghani, a heavy indica, because I knew I needed to be calm. I thought about how special my mom and Black women would feel seeing me dance to that song in particular, in a space where they aren’t welcome at all. Then I started the video.”

On a more serious note, I doubt Purely will work for another political office again, but I have a feeling he doesn't care. I wonder what lesson Feinstein took away from this?