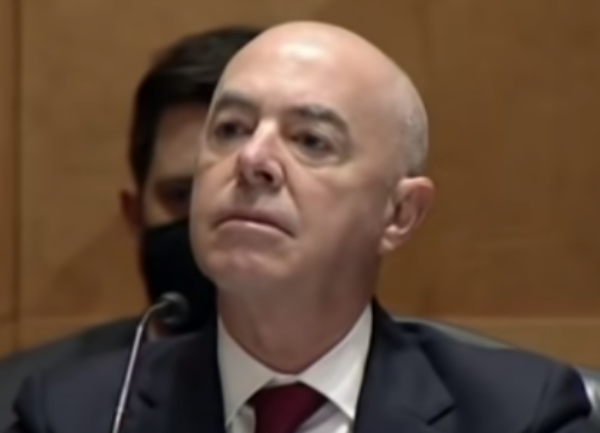 Mayorkas Chokes After Simple Question About Spying On Americans

Homeland Security Secretary Alejandro Mayorkas finally sat down for questioning to take on concerns about Biden's Disinformation Governance Board. Of course, he chose the softer side and chose to speak with CNN's Dana Bash, but she actually surprised me—A little...

“Republicans are calling it ‘Orwellian’ and comparing it to the Ministry of Truth in the novel ‘1984,’” Bash said of the board. “Can you clarify what exactly is this? What exactly will this disinformation governance board do? Will it monitor American citizens?”

“Dana, I’m very pleased to do so. It’s clear, I mean, those criticisms are precisely the opposite of what this small working group within the Department of Homeland Security will do,” Mayorkas replied. “And I think we probably could have done a better job of communicating what it does and does not do. The fact is that disinformation that creates a threat to the security of the homeland is our responsibility to address. And this department has been addressing it for years.”

Mayorkas then suggested that the board would simply be addressing disinformation from foreign sources even though he, himself, has already declared Americans the biggest threat to the United States.

“We know the problems but it’s not clear to me how this governance board will act. What will it do?” Bash pressed.

“So, what it does, it works to ensure that the way in which we address threats, the connectivity between threats and acts of violence are addressed without infringing on free speech,” Mayorkas said, noting that the board would not have “operational authority” to act but would work to provide information to those who did.

“So what we do, we in the Department of Homeland Security don’t monitor American citizens,” Mayorkas continued to object.

“You don’t, but will this change that?” Bash kept digging.

“No, no, the board does not have any operational capability,” Mayorkas said again.

Bash went on to point out some of the partisan questions about the board — and Nina Jankowicz, who has been tapped to head the board — noting that many appeared to be concerned that she would not act in a neutral fashion. This is the same person who deemed the Hunter Biden laptop story 'disinformation' with zero information.

“Would you be okay if Donald Trump were president, if he created this disinformation governance board? Or — if it is in place and he wins again in 2024 — that he’s in charge of such a thing?” she asked.

Mayorkas: Ministry of Truth won’t “monitor American citizens … the board does not have any operational capability. What it'ill do is gather together best practices … & disseminate those best practices to the operators that have been executing & addressing this threat for years” pic.twitter.com/VbHF6Wek2Y

Find me someone who believes that Homeland security doesn't have the 'capabilities' to spy on Americans and I'll show you an idiot. Seriously, do they even hear themselves anymore?