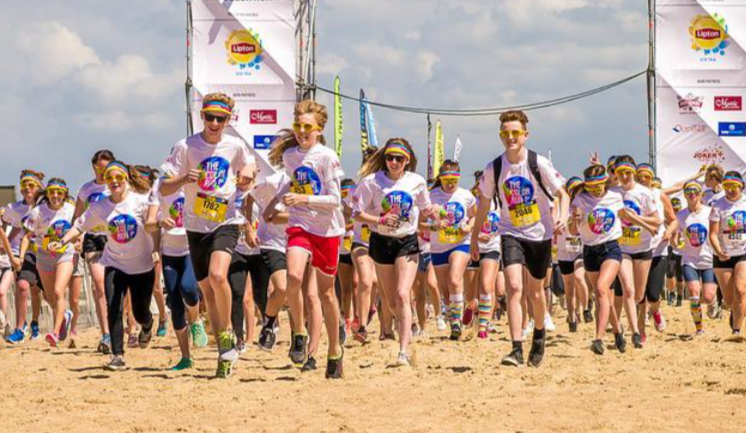 A 6-year-old Kentucky boy who ran in a Cincinnati marathon was visited by Child Protective Services, his parents said this week.

Kami and Ben Crawford, whose son, Rainier, ran in the Flying Pig Marathon in Cincinnati with his entire family, was visited by CPS at the family’s home in Bellevue, Kentucky, according to an Instagram post made by the family on Monday.

“On Friday, social workers came to our house and interviewed our children because leaders in the running community are calling running with children wrong,” the post says. It then shows a picture of Rainier seated at a table outside the family’s home supposedly speaking with one of the CPS workers.

“This needs to stop,” the Crawfords wrote in the caption to their Instagram post. “Our children are having emotional breakdowns, NOT from running, but from a mob that has been weaponized by [running’s] most accomplished and celebrated individuals. They are stating that children running is abusive and not providing any data or facts. The reports and stance are false. Hundreds of witnesses including police officers and hours of video footage corroborate. When will you apologize and retract?”

The family also noted that Rainier “adamantly decided that he wanted to run a marathon.”

A post shared by Kami and Ben Crawford (@fightfortogether)

As the controversy swarmed around the family, Olympic long-distance runner Kara Goucher condemned the parents for allowing Rainier to run in the 26.2 mile race.

“I don’t know who needs to hear this but a six year old cannot fathom what a marathon will do to them physically,” Goucher wrote on May 4. “A six year old does not understand what embracing misery is. A six year who is ‘struggling physically’ does not realize they have the right to stop and should.”

“I’m not questioning motivation or saying it is bad parenting. But as an Olympic athlete, I promise you this is not good for the child. Children are children. Let them run around, but as the parent you need to protect their growing bodies and their young minds,” she added.

I don't know who needs to hear this but a six year old cannot fathom what a marathon will do to them physically. A six year old does not understand what embracing misery is. A six year who is "struggling physically" does not realize they have the right to stop and should.

The Crawfords responded to the controversy in another Instagram post last week. “On May 1 our family of 8 finished an entire 26.2 mile marathon,” the family wrote in the caption of the post, which showed Ben Crawford, Kami Crawford, and their 6 children crossing the finish line together.

“This is the first marathon our entire family has run together. Our 5 older kids waited for over an hour at mile 25 and after 8 hours and 35 minutes we all crossed the finish line together. After 2 days celebrating with friends, how we spent our day has got a lot of attention from some who are accusing us of being irresponsible and even abusive,” the post noted.

The Crawfords wrote that they “have never forced any of [their] children to run a marathon” and “cannot even imagine that as feasible practically or emotionally.”

The Crawfords also explained that their 6-year-old just wanted to be with the rest of the family and begged to go. They added that they were always ready to 'pull the pug' if he was ready to quit.

I can agree that 26 miles sound far but at 8 and a half hours, we're not talking about competitive running. What is that 3 maybe 4 mph? That's walking...

This is what we were built to do.