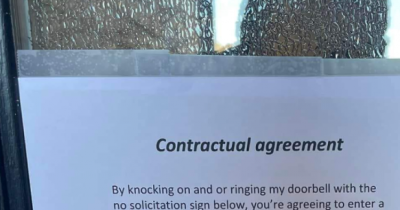 If your neighbor is crowding you out of your own home or yard, it's time to take action.

There is a saying, "Good fences make good neighbors." For many people, this could be true. However, some neighbors who do not respect good fences or any other border. When a neighbor unlawfully encroaches on your property, you have options depending on the type of infringement.

However, this one homeowner did a more concise agreement as he don't want to be disturbed by his neighbors. The homeowner posted a “contractual agreement” in front of his door so neighbors can easily read it.

In addition to posting, a black and silver plaque is also visible on his front door that stated, “No soliciting – fundraising / salesmen / religion / politics.” 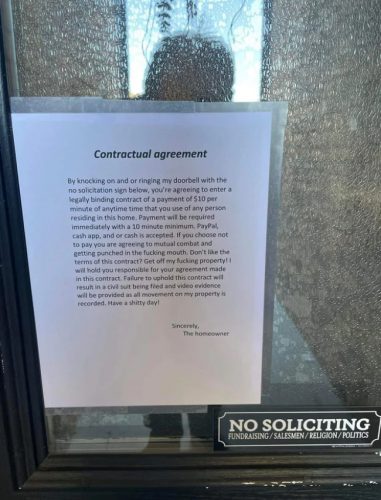 The grumpy homeowner simply did not want anyone bothering them, which was why they posted the sign in the first place.

Here's what the letter reads:

“By knocking on and or ringing my doorbell with the no solicitation sign below, you’re agreeing to enter a legally binding contract of a payment of ten dollars per minute of anytime time that you use of any person residing in this home.”

“Payment will be required with a ten-minute minimum. PayPal, cash app, or cash is accepted. If you choose not to pay, you are agreeing to mutual combat and getting punched in the f**king mouth. Don’t like the terms of the contract? Get off my f**king property!”

“I will hold you responsible for your agreement made in this contract. Failure to uphold this contract will result in a civil suit being filed, and video evidence will be provided as all movement on my property is recorded.”

Before the signoff from the homeowner, the message concludes: “Have a sh*tty day!”

It doesn't take long before someone photographs and posts the photo on Reddit, where he faces some backlash and shreds by legal experts:

“Excuse me, your honor. It clearly specifies you cannot knock on or ring the doorbell. It says nothing about not knocking on the door itself. Guy needs someone to review his contracts, leaving loopholes like that in there.”

“I think it’s more concerning that he’s outright saying that anyone who knocks on his door has the right to punch him in the face.”

Another person wrote, “I mean, it’s also about as binding as a kindergartener’s glue stick.”