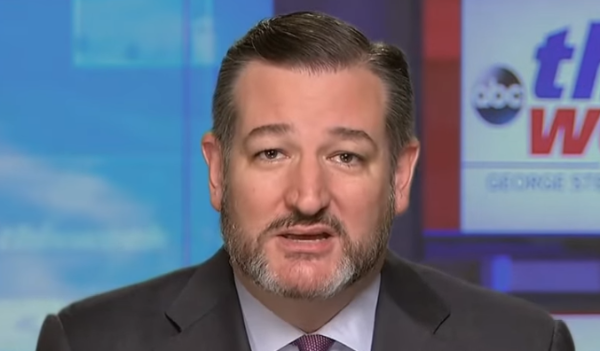 Cruz Sounds The Alarm: We're 'One Vote Away' From 'Losing Our Fundamental Rights'

Texas Senator Ted Cruz sounded the alarms Sunday over Biden's SCOTUS pick and the power of the Supreme Court. He waned that our 'fundamental rights' are in jeopardy adding that we are just 'one vote away from losing it all.

District of Columbia v. Heller, "the landmark case upholding the Second Amendment right to keep and bear arms," was decided by a 5-4 margin, Cruz noted.

There is a 100% chance that Supreme Court nominee Judge Ketanji Brown Jackson would vote to reverse the Heller decision, Cruz said. He also put the odds at "100%" for Judge Jackson's vote to overturn the death penalty.

"You are supporting that kind of radical agenda," he added.

Levin called Jackson "totally predictable" and "the hard Left of the judiciary in this country."

The Fox News host said he has not heard any Democratic senator speak out against her.

"A couple of Republican senators are on the fence" and Sen. Susan Collins will vote for her, he continued.

Levin called her an "extremist," saying the public has "a right to conclude" that the senators who vote for Jackson are "weak on these very same subjects" as the judge.
Watch

According to the Daily Caller, White House Press Secretary Jen Psaki "pushed back against claims that Biden's SCOTUS pick offers lighter sentences to convicted pedophiles. Psaki said that Jackson’s sentencing of sex crimes was 'consistent' with recommendations at a Thursday press briefing.