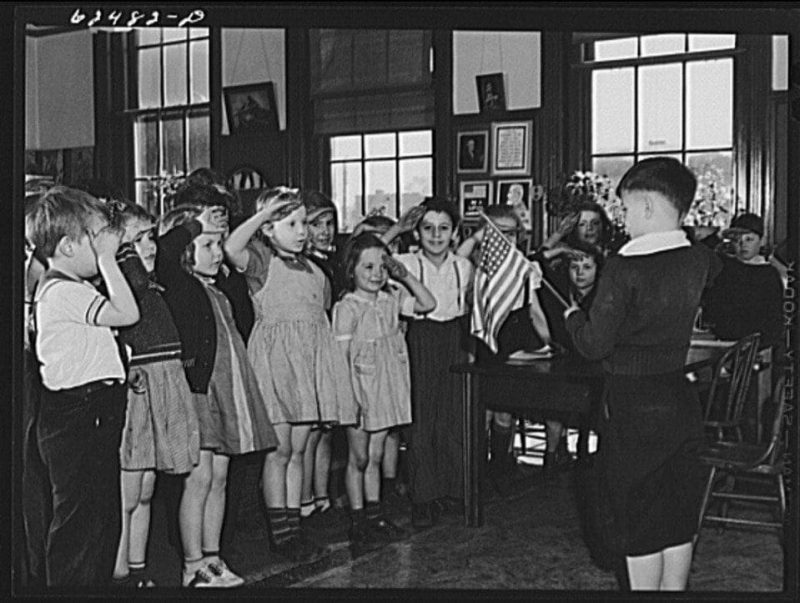 California College Bans Pledge Of Allegiance For Being Racist

The Pledge of Allegiance, a sign of patriotism and pride for our nation was banned from Santa Barbara City College.

Robert Miller cites an article from The Washington Post which says,

White Protestant Americans sought both to stanch the flow of immigrants and force those who did enter to assimilate and adopt their idealized American culture. Congress enabled the goal of exclusion by passing racially exclusionary immigration laws, including the Chinese Exclusion Act of 1882, the Immigration Act of 1891 and the Geary Act of 1892.

Bellamy’s pledge advanced the goal of assimilation — written to, in his words, “mobilize the masses to support primary American doctrines” by warding off internal enemies hostile to “true Americanism.” The creation and proliferation of the pledge, in part, served as a way to consolidate white Anglo-Saxon Protestant American values that the white mainstream perceived as under siege.

In a similar way, the 1954 addition of the words “under God” to the pledge constituted a salvo against another outside menace — godless Communism.

The nativism of the 1890s that birthed the Pledge of Allegiance is still with us today. At a time when the president of the United States demands restrictive immigration laws in the wake of terrorist attacks and promises to build a “great wall” between the United States and Mexico to curb the flow of Mexican migrants whom he has categorically branded criminals and rapists, we would do well to learn from our history of race-based moral panics and compulsory patriotism.

Given that history, we should not be surprised that our current national concern over borders and citizenship has prompted fierce debates about race and patriotism.

In an email between Miller and a former adjunct instructor at Santa Barbara, Celeste Barber, he wrote the following as an explanation,

Moreover, I have discovered that the Pledge of Allegiance has a history steeped in expressions of nativism and white nationalism. The Pledge of Allegiance was written in 1890 by Francis Bellamy, a former Baptist minister. Among other reasons, he wrote it in reaction to the increasing number of immigrants entering the United States in the late 19th century and early 20th century. In support of the Pledge, Mr. Bellamy expressed concern about the “races that we cannot assimilate without a lowering of our racial standard.” As one commentator noted. “While the language contained in the Pledge is not overtly nativist or xenophobic, the spirit that animated its creation was steeped in this sort of bigotry.

After some backlash, Robert Miller removed the ban on the Pledge of Allegiance and issued the following statement,

“While the College recognizes that there are different opinions about the Pledge of Allegiance, it expects that the First Amendment rights of members of the public to comment at board meetings will be respected,” Miller said. “It is inconsistent with those rights for other audience members to interrupt and mock speakers on this topic, as happened at the January 24 Board meeting.”