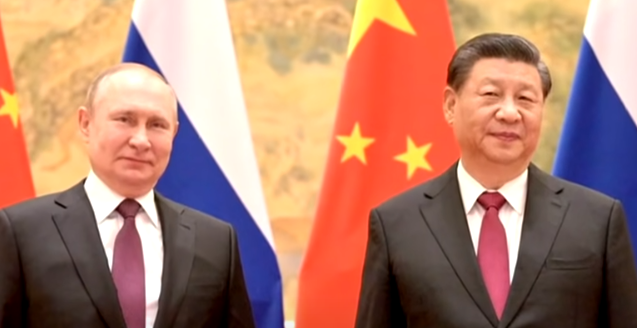 Biden Unites The Enemies Of Freedom In The Worst Way

A perfect storm could be brewing and it's not something we should all be ignoring, right now. While Biden has been busy courting foreign countries for oil, at least one of those countries is reportedly plotting to overthrow the US dollar by selling to China in Yen instead of US currency. This could throw the entire global market off hilt because it relies on the stability of the petrol dollar—Especially if other countries follow suit.

What's the hang-up? Biden. The Saudis are mostly peeved about the Iran Nuclear deal Biden is in process of striking but even Iran has a trick up their sleeve which I'll explain in just a moment.

Because we need to talk sanctions...

Right now Russia is under some pretty crippling sanctions and needs to find new streams of revenue—Enter China. The communist government has been in talks of trade with Russia, which should go without saying, could be disastrous for the global efforts to stop the invasion of Ukraine.

First, this won’t exactly be an alliance. It’s more like Moscow is set to become the biggest vassal state in modern history — the price Russian President Vladimir Putin will have to pay for his disastrous war in Ukraine.

Putin needs China’s cash, investments, military purchases, the market for commodities, and overall general support to survive in the months and years ahead. Otherwise, with trillions of dollars of economic sanctions about to come down on Putin’s head, Russia as we know it today may simply cease to exist.

Now Back To Iran:

Iran, Russia, and China are holding their third joint naval drill in the northern Indian Ocean, amid speculation that the three countries are teaming up in the face of growing regional tensions with the United States.

Russian vessels, together with the Chinese and Iranian navies, performed "joint tactical maneuvering and practiced artillery fire at a naval target as well as search-and-rescue missions at sea," the Russian Defense Ministry said on January 21, adding that the sides also "practiced inspection and liberation of a ship that was supposedly captured by pirates."

According to RFE, Iran's President Ebrahim Raisi, who came into office in June 2021, has pursued a policy to deepen ties with both Moscow and Beijing. Russia, Iran, and China are subject to Western sanctions imposed over various issues, including Russia’s threats on Ukraine’s territorial integrity, human rights abuses in China, and Iran’s nuclear program.

As I said, it's a storm brewing and it could be disastrous no matter what way this thing swings. If Biden pushes ahead with the Iran Nuclear deal the Saudis have vowed to sell oil to China using their highly unstable Yen, then the market takes a critical blow. Why? On the off chance that Iran will abandon their nuclear projects and break ties with Russia and China? How did that work out last time?

If something isn't done about this growing trio alliance we could all be staring the next world war down, right now.

This has to be the worst time in history for the US to be captained by weak leadership. I could easily say that weak leadership inspired the growing storm.