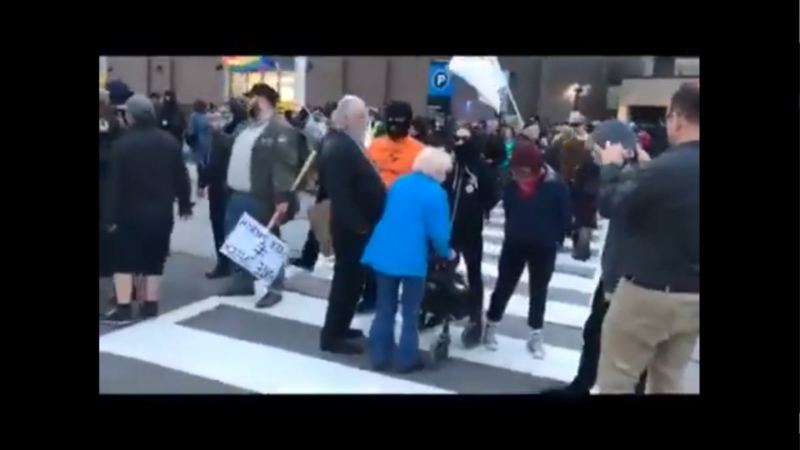 Sissified Antifa terrorists felt it necessary to harass an elderly woman who was trying to cross the street with a walker outside of an event. The masked protesters

Let's call then what they actually are; they are terrorists.

These people are absolutely ironic.

Antifa is supposed to be an "anti-fascist" organization.

Fascism has to do with forcible suppression of the opposition. That is exactly what Antifa is doing. They are the clear visual definition of fascism. How else would you define it?

According to Red State,

Antifa showed exactly why some people think that during a free speech event at Mohawk College in Hamilton, Canada with Canadian People’s Party politician Maxime Bernier and Dave Rubin of the Rubin Report.

A large crowd of about 100 protesters decrying the event stood outside with signs advocating for immigrant rights and yelling chants denouncing those entering, comparing them to Nazis and neo-Nazis. Supporters of the People’s Party — some wearing “Make America Great Again” hats — stood behind police and engaged with some of the protesters verbally for about an hour.

The crowd tried to block people from getting into the event and assaulted some.

These people are the scum of the earth!

Here's what needs to happen with them. They need to be definitely be labeled as a domestic terrorist organization officially.

Then every single time one of them hits the street, arrest them and throw them in jail. No hesitation.

They are not just protesters exercising free speech. They are very violent. They attack whoever disagrees with them with various items including chemicals. Even in this video above...what are they trying to accomplish here with preventing this elderly woman from crossing the street?

All they're wanting to do is incite violence. Essentially, they want you to give them a reason to attack you.