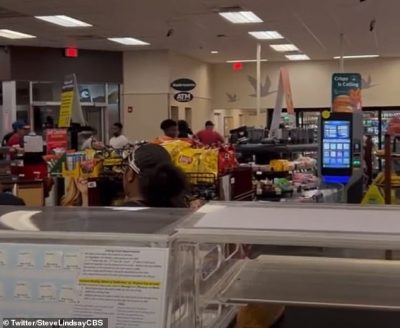 A Woman And Her Child Saw A Group Coming Into A Store And Knew They Needed To Leave Immediately!

Teenagers in Philadelphia made the decision to rob a Wawa convenience store on Saturday night.

While employees stood helplessly by and watched the chaos unfold, the footage shows approximately 100 teenagers vandalizing and looting a Wawa convenience store by throwing food and smashing products while standing on chairs, and when the Philadelphia Police Department showed up, the teens were scattered. Fortunately, no one was wounded during the smash-and-grab event; however, Police say they are investigating the incident.

According to CBS, it happened around 8:22 p.m. at the Wawa convenience store in the Mayfair section of Philadelphia located on Roosevelt Boulevard at Tyson Avenue. Authorities said that the gang of youngsters came from the Rolling Thunder Skating Center, which is also on Roosevelt Boulevard, where they allegedly damaged tables.

Police added that some of the people in the videos may be as young as 10.

Chaos erupts as a large group of people trash the Wawa at Tyson & the Blvd in NE Philly.@CBSPhiladelphia pic.twitter.com/v2wgxv1ZLZ

The Philadelphia School District and the police are currently collaborating to try to identify those responsible for the convenience shop attack.

John J. Ryan, Philadelphia Police Captain. said, "It was approximately 50 to 100 people, the Wawa was completely sacked by the kids coming inside and destroying things, and thankfully there were no injuries to the Wawa, personnel, or to responding police."

And the teenagers who will be identified, Ryan said, might be charged with riot, a felony, criminal mischief, vandalism, and stealing.

Over the incident, residents expressed their outrage, "I was angry. I was very upset because being in the shoes of those employees, I know just how terrifying it is and how like frustrating it is having to clean up after that as well," said former employee Kaitlyn Holtzman.

When did this become ok? Why is this a thing? Where did we go wrong?

@Suntoucher23 this is what happens when @DA_LarryKrasner doesn't care to prosecute crime and @JohnFetterman supports him as a champion for criminal justice reform. And this isn't even violent crime.

"Sometimes I'm afraid to stop, it's a shame," One woman said who wished to remain anonymous, she claims that she frequently hesitated before going into the store.

"The bottom line is: we can not have this type of behavior happening in this city. The business community doesn't deserve that, the citizens don't deserve it," said John Stanford, first deputy police commissioner.

"We have to be cautious because if we just had officers running in and just grabbing kids, we would be having a whole different conversation today. And then that's the unfortunate piece," Stanford added.

Regarding the incident, Wawa issued the following statement:

"We are working closely with law enforcement to support their efforts to bring all of the perpetrators to justice as soon as possible. We remain committed to protecting our associates and customers and ensuring a safe, welcoming environment for each customer, in every Wawa store. Nothing is more important to us."