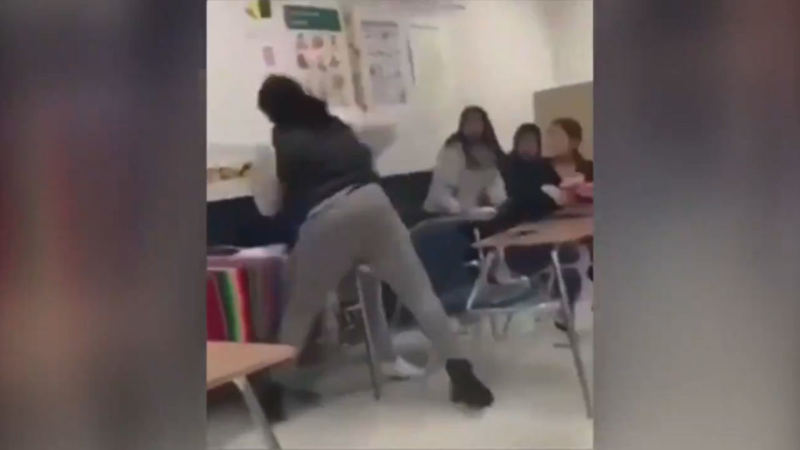 Watch: Public School Teacher Is Charged With Felony After Brutal Assault On A Student During Class [VIDEO]

Do you recall your days in middle or high school when your primary teacher would be out and you'd get a substitute teacher for a day or maybe even a week if they're on vacation? Some of the subs were good and you looked forward to them being there, but then there were some who you dreaded because of how bad they were.

Well, there's one substitute teacher who definitely ranks at the top of the list for subs who you don't want at your school.

Tiffani Shadell Lankford (32) was caught on video fighting with a female student half her age (16) and punching the girl in the face.

The substitute teacher was immediately fired and the principal of the school, Karen Zuniga released this statement:

“As a family, we share both the good news and bad news together. Today, I have to tell you about an incident that is disconcerting.

“This afternoon, we fired one of our guest teachers for hitting and fighting with a student. Under no circumstance is that behavior tolerated at Lehman High School or in Hays CISD. Additionally, the former employee was arrested by the Hays County Sheriff’s Office and faces potential criminal charges. Her actions will also be reported to the Texas Education Agency.

“We take the safety and security of our students seriously. We took swift action when this incident occurred and will do everything necessary to protect our students.”

Here's a look from another angle and from just a few seconds earlier.

In a second statement on Friday night, the district said that during the incident, classmates of the girl alerted other adults on campus and the substitute was immediately removed from the classroom and questioned by school resource officer law enforcement agents.

“Under no circumstance is that behavior tolerated at Lehman High School or in Hays CISD,” said Lehman Principal Karen Zuniga. “We take the safety and security of our students seriously. We took swift action when this incident occurred and will do everything necessary to protect our students.” In addition to firing the substitute teacher, the district will also report the incident to the Texas Education Agency and cooperate with law enforcement investigators.

According to Hays CISD, Lankford had worked for the district since Aug. 30, when she underwent orientation training. The district says her first job in the classroom was on Sept. 13 and worked in a classroom a total of 18 times. (KXAN)