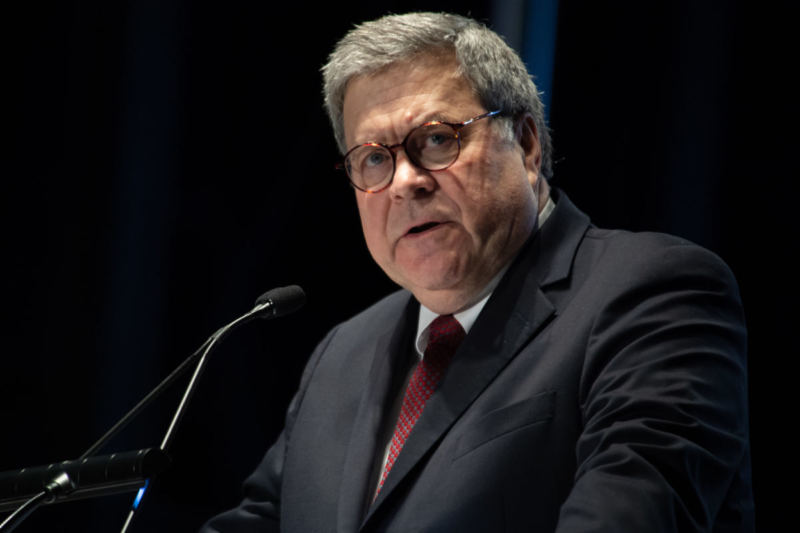 Big news coming out of Washington! Last week, Attorney General William Barr indicted 8 individuals on some SERIOUS charges, among them is one of the top witnesses from the Mueller investigation.

There apparently has been a massive scheme of illegally funneling foreign donations to Democrats.

Two Lebanese-American businessmen -- including a witness in then-Special Counsel Robert Mueller's probe -- are among eight people charged with conspiring to funnel more than $3 million in illegal foreign campaign contributions to an unnamed candidate in the 2016 elections, the Justice Department announced on Tuesday.

Although the indictment does not specifically name the 2016 candidate, campaign finance records indicate that the recipient of the donations was Democratic presidential candidate Hillary Clinton.

In an unsealed 53-count indictment, prosecutors alleged that Ahmad “Andy” Khawaja, CEO of an online payment processing company, and George Nader, who has acted as a liaison between President Trump’s top advisers and officials within the United Arab Emirates, conspired to conceal Nader's $3.5 million in campaign contributions to an unnamed 2016 presidential candidate by making them in the name of Khawaja, his wife and his company, Allied Wallet Inc., all while Nader allegedly reported to an official from a foreign government about his efforts to gain the campaign's political influence.

Some of the individuals named have been Adam Schiff, Cory Booker, Hillary Clinton, Kirsten Gillibrand, Ted Lieu, and George Nader who was Mueller's key witness.

To see a full list of all the recipients of donations from this scheme, you'll find them here. 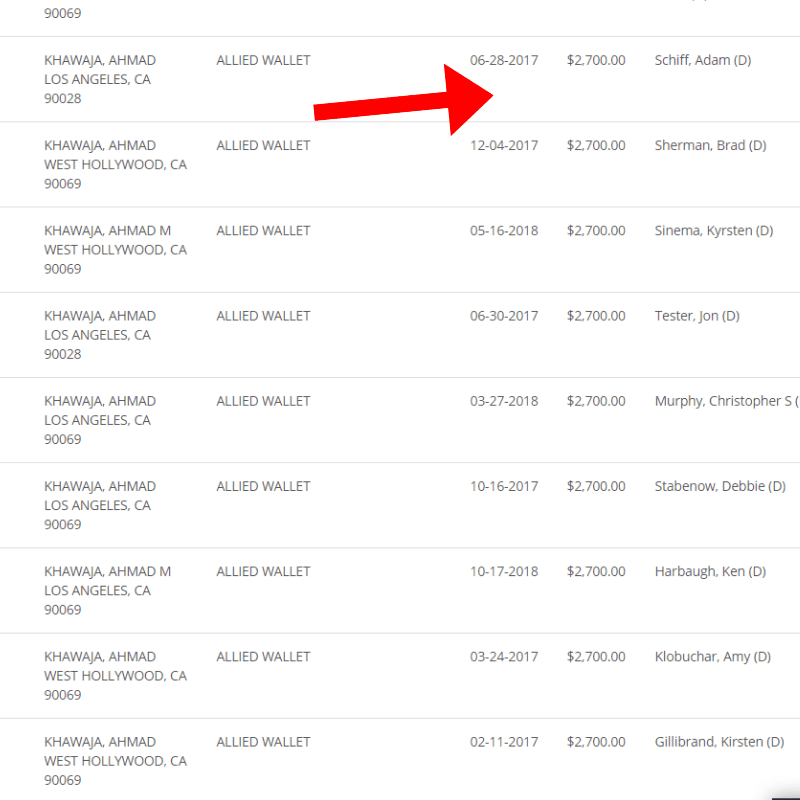 The Department of Justice released the following:

Earlier today, an indictment was unsealed against the CEO of an online payment processing company, and seven others, charging them with conspiring to make and conceal conduit and excessive campaign contributions, and related offenses, during the U.S. presidential election in 2016 and thereafter.

Assistant Attorney General Brian A. Benczkowski of the Justice Department’s Criminal Division and Assistant Director in Charge Timothy R. Slater of the FBI’s Washington Field Office made the announcement.

A federal grand jury in the District of Columbia indicted Ahmad “Andy” Khawaja, 48, of Los Angeles, California, on Nov. 7, 2019, along with George Nader, Roy Boulos, Rudy Dekermenjian, Mohammad “Moe” Diab, Rani El-Saadi, Stevan Hill and Thayne Whipple. The 53 count indictment charges Khawaja with two counts of conspiracy, three counts of making conduit contributions, three counts of causing excessive contributions, 13 counts of making false statements, 13 counts of causing false records to be filed, and one count of obstruction of a federal grand jury investigation. Nader is charged with conspiring with Khawaja to make conduit campaign contributions, and related offenses. Boulos, Dekermenjian, Diab, El-Saadi, Hill, and Whipple are charged with conspiring with Khawaja and each other to make conduit campaign contributions and conceal excessive contributions, and related offenses.

According to the indictment, from March 2016 through January 2017, Khawaja conspired with Nader to conceal the source of more than $3.5 million in campaign contributions, directed to political committees associated with a candidate for President of the United States in the 2016 election. By design, these contributions appeared to be in the names of Khawaja, his wife, and his company. In reality, they allegedly were funded by Nader. Khawaja and Nader allegedly made these contributions in an effort to gain influence with high-level political figures, including the candidate. As Khawaja and Nader arranged these payments, Nader allegedly reported to an official from a foreign government about his efforts to gain influence.

The indictment also alleges that, from March 2016 through 2018, Khawaja conspired with Boulos, Dekermenjian, Diab, El-Saadi, Hill, and Whipple to conceal Khawaja’s excessive contributions, which totaled more than $1.8 million, to various political committees. Among other things, these contributions allegedly allowed Khawaja to host a private fundraiser for a presidential candidate in 2016 and a private fundraising dinner for an elected official in 2018.

The indictment further alleges that, from June 2019 through July 2019, Khawaja obstructed a grand jury investigation of this matter in the District of Columbia. Knowing that a witness had been called to testify before the grand jury, Khawaja allegedly provided that witness with false information about Nader and his connection to Khawaja’s company. Boulos, Diab, Hill, and Whipple also are charged with obstructing the grand jury’s investigation by lying to the FBI.

Currently, Nader is in federal custody on other charges.