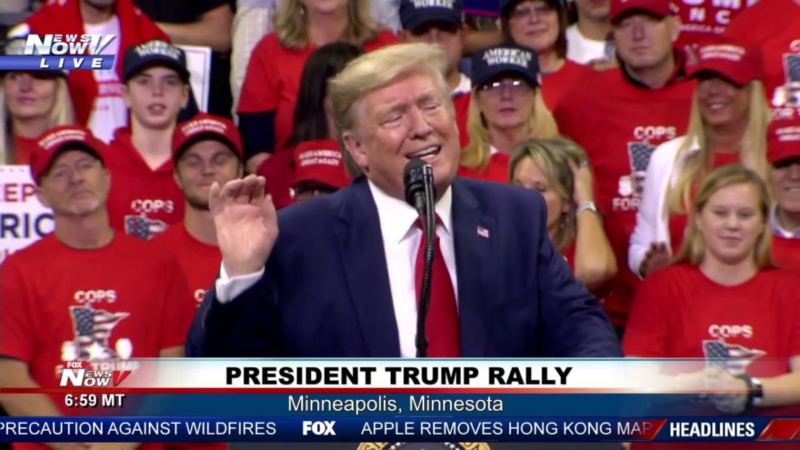 Trump Slams Ilhan Omar Hard During Rally In Her Own State, Audience Eats It Up

He didn't hold anything back, mentioning her marriage to her brother, immigration fraud, being anti-semitic, sympathizing with ISIS and Al-Qaeda, and more.

Take a look at the transcript of what Trump had said about Omar:

"So in desperate attempt to attack our movement. Nancy and Chuck, two beauties, have given control of the Democrat party entirely over to the radical left, including Minnesota’s own representative Ilhan Omar. I know you people. I know you people. I know the people of Minnesota, and I want to tell you, and I also, at the same time, it’s both a question and a statement, how’d the hell did that ever happen? How did it happen? How did it happen? Congresswoman Omar is an America hating socialist. She minimized the September 11th attack on our homeland. Where far more than 3,000 people died, saying, “Some people did something big deal. Some people did something.” She pleaded for compassion for ISIS recruits right here in Minnesota. Omar laughed that Americans speak of Al-Qaeda. You remember that tape? Speak of Al-Qaeda. But when we say something about the United States, you just don’t say America with any intensity. Remember that? Representative Omar has a history of launching virulent anti-semitic screeds, whether you like it or not. She’s said the US support for Israel is all about the Benjamins. She said that pro-Israel lawmakers have an allegiance to a foreign country. Omar wrote that Israel has hypnotized the world, may Allah awaken the people and help them to see the evil doings of Israel and the United States.

How do you have such a person representing you in Minnesota? I’m very angry at you people right now. She is a disgrace to our country, and she is one of the big reasons that I’m going to win, and the Republican party is going to win Minnesota in 13 months."

Trump blasts far-left Rep. Ilhan Omar (D-MN), uses air quotes when referring to her: “Congresswoman Omar is an America-hating socialist. She minimized the September 11th attack on our homeland”

Minnesota voters boo loudly when they hear her name. pic.twitter.com/VtQEAHS7BV

"Thank you very much. So we’re honored to have with us today a special guest, a man that really is a terrific talented writer. He knows a great deal about all those tangled lies of Omar. Mr. Scott Johnson of Power Line. He wrote some stuff, I can’t believe it. Where’s Scott? Where’s Scott? Thank you, Scott. Thank you, Scott. What a job. Man, do you have her figured out. The only problem is, Scott, it’s incredible talent, much more talented than most of these people that you heard about. The problem is they never pick it up. They don’t want to pick it up, but we pick it up, Scott, and the people get it and we thank you for your great reporting. Thank you. Thank you very much. And Scott reported everything about Omar is a fraud, including her name.

Scott reports his sources told him that, quote, Omar’s legal husband was Omar’s brother and that she had married him for fraudulent purposes. You mean like coming into the United States, maybe? And as Scott says, “We have seen a plethora of congressional scandals in our history yet we have never seen scandals like Omar’s in Congress, and nothing gets done about it.” I hope that some of you people are looking, because what AOC has gotten away with campaign financing and what … I call it AOC plus three, that’s what it is. And Omar is one of the three. What AOC has gotten away with all of that money that she used for her personal self with campaign finance is worse, and nothing happens to them, but it happens to you, and it’s not fair. The fact is, we’re in a struggle for the survival of democracy in America. The only message these radical socialists and extremists will understand-

Message these radical socialists and extremists will understand is a crushing defeat on November 3rd, 2020. With your help, we will win back the House, we will keep the Senate and we will win the White House. And we’re thrilled to be joined tonight by some incredible people that have helped me so much. One of your tremendous talented, tough, Congressman Tom Emmer. Tom. Also a man, you don’t want to fight him, and you don’t want to play him in hockey because he was tough."

Trump SLAMS Ilhan Omar over claims she committed "fraud" by marrying her brother / is using a fraudulent name.

Omar called them “xenophobic conspiracy theories", but some legit publications have been looking into it, asking her for docs for review. pic.twitter.com/xi2iAAHbK1

Omar did have some words to say in response to Trump's diss.

At his rally just now, Trump called me an “America-hating socialist” and a “disgrace.” He shouted xenophobic conspiracy theories about me. He scolded my district for voting for me.

His hate is no match for our movement. Stand with me by donating now: https://t.co/QdUrT9zJsr pic.twitter.com/Ik8I9zlRTf

People swarmed to lash back at her on Twitter after idiotic remarks.

You are what he said you are. Minnesota should be ashamed of themselves for voting you in. Oh, I forgot, Minnesota didn't vote for you, the rest of your people for your home country that's living there did. - @BlairScotty

Well it is the truth your an anti American and you should be thrown out of this country.. - @ripmasterson1

Wait.. @IlhanMN when you were spotted at the riots after the rally, you said you were in Morocco??? Lies just come so easy off that evil tongue 😱 - @shadowknows6

But @IlhanMN, you are an "Americanophob" and a "disgrace," to anyone capable of cognition. And BTW, it isn't "xenophobic" to express truth. To think that is just as idiotic as saying someone who doesn't agree with same-sex marriage is homophobic. Please work more to #MAGA & #KAG - @tjdbris