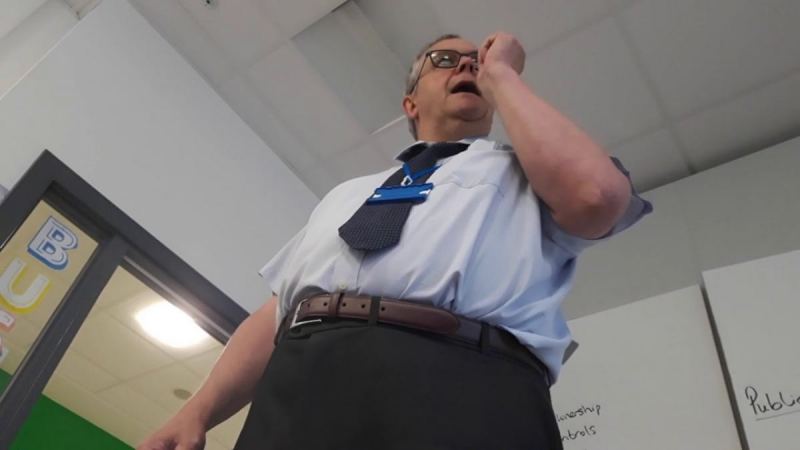 Teacher Kicks Student Out of Class For Disagreeing On Genders [VIDEO]

Take a look at the video below and just listen to the teacher's rationalization of the law he's trying to lay down. I'll admit that the student could have handled the situation a little better, but regardless, the student is being silenced for having a varying opinion of a view that's unscientific.

So here it is loud and clear. The "authority" which is the government has declared that there are more than two genders. If you care to disagree and have your own opinion, then you will be reprimanded and/or punished.

You are no longer free to think freely. You must only think of the things that your lord and savior the State tells you that you can think.

Here is something interesting though. Reddit users have been commenting like mad about this video and they seem to be having a difficult time finding this anywhere in the "national school authority policy".

[–]notacreaticedrummerAyn Rand Conservative 979 points 2 days ago
The teacher claims at about 1:20 that he is quoting the “national school authority policy.” I can’t find this anywhere. I think he made it up.

[–]thebigmumaw 380 points 1 day ago
I did some googling myself and he definitely pulled it out of his ass. But whether it’s real or not does not change my mind that the UK is going in the shitter if they don’t pump the brakes here soon.

[–]BCGraffConstitutional Conservative 13 points 1 day ago
The UK is already in the shitter, ya’ll need to throw it in reverse and back out. Best wishes from Texas even though we’re in not much better shape than ya’ll.

[–]sand313manLibertarian Conservative 46 points 1 day ago*
Why does the teacher sound British-Irish and the kid sound american.. haha. Just curious.
Also no.. he is not pulling it out his ass. Teachers are trained on these ‘inclusion’ policies. They are constantly briefed on it.
In fact I think the teacher agrees there are scientifically two genders. But to be fair to him, and this includes medical professionals also, you can get into shit sometimes, if you agree with the kid.
So now, the teacher has to sit and have an arguement against the kid, infront of the class, on something I don’t think he himself actually believes in. (Aka, he knows the science doesn’t back the spectrum. But he isn’t interested in getting trapped on the issue.)
He is kind of in hard place.
He even tells the kid to lodge a formal complaint. Haha.
The old man is just fucking fed up I think. Not just by the kid, but also with the policies his job depends on.
The truth is he answered back well, for someone who is screwed if he does or if he doesn’t.
Jordan Peterson, actually talked about professionals getting filled with discontent being forced to repeat and represent arguements, they may (or may not believe in)

So he's either pulling it out of his rear, or as the Reddit user commented above, they are indeed trained on these "inclusion policies" by the State.