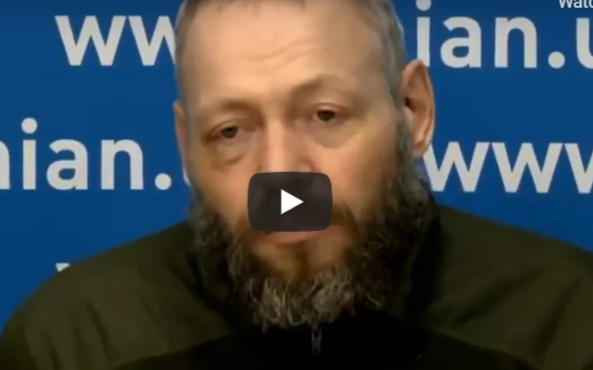 A Russian commander apologized for his country's invasion of Ukraine. He called the war "genocide" waged under false justifications. The comments came after he was captured by Ukrainian forces and safe from Putin's tyrannical grasp.

"We were told that … Ukraine's territory is dominated by fascists' regime. Nationalists, Nazis have seized power," Lieutenant Colonel Astakhov Dmitry Mikhailovich told reporters at a press conference in Kyiv on Saturday. "Obviously, this information was unilateral information."

Mikhailovich and Russian soldiers spoke out against the war and explained how they were misled.

"I feel shame that we came to this country," Mikhailovich said. "We knew very little. … We brought sorrow to this land."

The commander urged Russian soldiers to oppose the invasion and recognize it as a futile effort.

"You are in a tense situation, going against your own commander. But this is a genocide," Mikhailovich said. "Russia cannot win here anyway. … We can invade the territory, but we cannot invade the people. We would not be able to keep this territory."

Footage of Mikhailovich and other captured Russian soldiers has raised questions about whether Ukraine is violating the Geneva Conventions, which provide POWs with protections.

According to Article 13: “Prisoners of war must at all times be protected, particularly against acts of violence or intimidation and against insults and public curiosity. Measures of reprisal against prisoners of war are prohibited.”

Andrew Stroehlein, a human rights activist who serves as European media director of Human Rights Watch, said in a tweet that “humiliating or making POWs a subject of public curiosity or ridicule is strictly prohibited by the laws of war.

“Although it may seem in some videos that POWs are free to speak as they wish, they are held captive by another military force, and it’s almost impossible to judge from one video the conditions they face,” he wrote.

Stroehlein said “this prohibition protects families of soldiers back in their home country who may face retaliation if it is known that their family members have been captured.