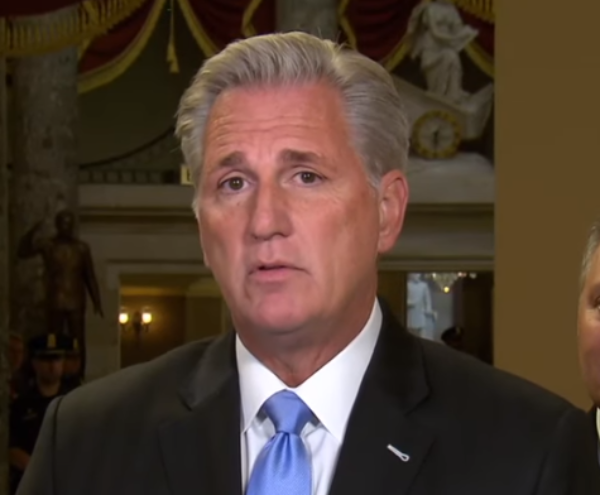 Kevin McCarthy came off as such a tool during his presser this week. The House Minority Leader went full Judas on Americans following a meeting with Joe Biden where he declared the debate over election fraud was over. He then added that he doesn't "think anybody is questioning the legitimacy of the presidential election,” even though there is an active investigation of voter fraud going on in Arizona.

'We are sitting with the president today,' he continued. 'From that point of view, I don't think that's a problem.'

McCarthy goes on to make Biden, of all people, out to be a bipartisan president as he spoke briefly on their very 'productive' meeting about the Democratic wishlist known as the infrastructure bill.

A bill, that only allocates a reported 7% of its funds towards actual infrastructure...

It didn't end there, the Californian then over redirected questioning about Biden's lack of response towards national and international crises, saying:

"What the president believes his role is, is to lead by example and to offer an alternative of leadership to the American people, which is reaching his hand across the aisle, offering to work with members of both parties on addressing issues the American people have concerns about."

McCarthy drops some hint of his motive behind the sudden shift as the turncoat stood next to Mitch McConnel.

The last question McCarthy took from the media was, “Are you concerned about your future in leadership, given you protected [Liz] Cheney for so long, and missed earlier calls to remove her?”

McCarthy's very telling response sort of explains it all, “Not at all. I’m looking forward to being Speaker in the next Congress.” Which sounds like this was something he and Biden agreed on.

I realize that members of Congress have to vote on their Speakers but let's be real, they seem to buy and trade votes like currency. Just look at how Biden nominated Sen. Joe Manchin's wife for a $160K federal job. Even though Democrats hold the majority the upper chamber of Congress is split 50/50 which makes Manchin a potential swing vote for Biden.

Let me know what you think in the comments below.