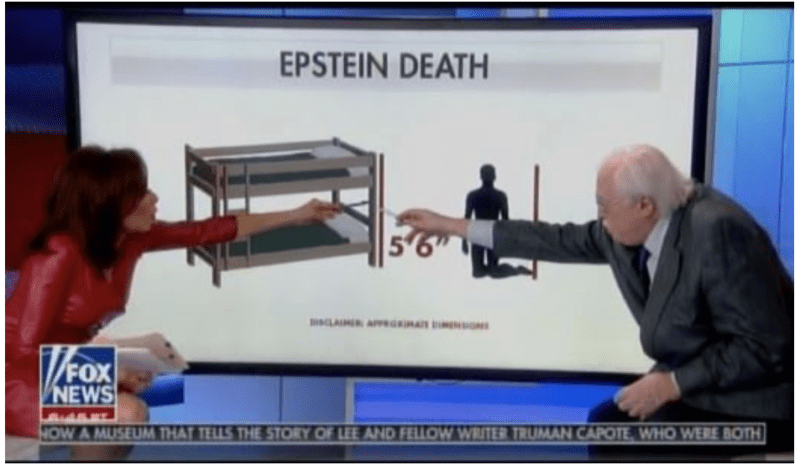 During an appearance on Fox News with Judge Jeanine, world-renowned forensic pathologist Dr. Michael Baden showed some very convincing evidence that Jeffrey Epstein’s death was not a suicide as the media is portraying.

Epstein’s bed was exactly 5' 6" tall. On his knees, Epstein stood 4' tall. The noose was found tied to the bed at 3'6". According to Dr. Baden, the height of the noose would not bring enough force to break any bones, needless to say definitely not 3 bones in his neck.

[BADEN] “Those three fractures are extremely unusual in suicidal hangings and could occur much more commonly in homicidal strangulation,” Baden, who is also a Fox News contributor, said.

“I’ve not seen in 50 years where that occurred in a suicidal hanging case,” the 85-year-old medical legend told Fox News.

Judge Jeanine: Now I want to be real clear. I want the viewers to understand. I’ve tried these intentional strangulation cases too. The breaking of the hyoid bone, the fracture of the two Thyroid cartilage, that means serious force on the neck. That you don’t normally get in a hanging. Especially in a hanging. I want the next screen guys. Here’s a bunk bed. The height is 5’6″. On his knees Epstein is 4′ tall. You now have been able to identify that the tie is right there (around 3′ 6″).

Dr. Baden: The ligature is tied up here (3’6″) but it’s down to the floor as far as the body goes. So there’s not enough force there to cause ANY fracture.

Judge Jeanine: Any fracture at all, let alone these fractures?

There is going to some big news coming very soon related to the Epstein "suicide" and you'll be able to find it here because so far the media isn't reporting it.