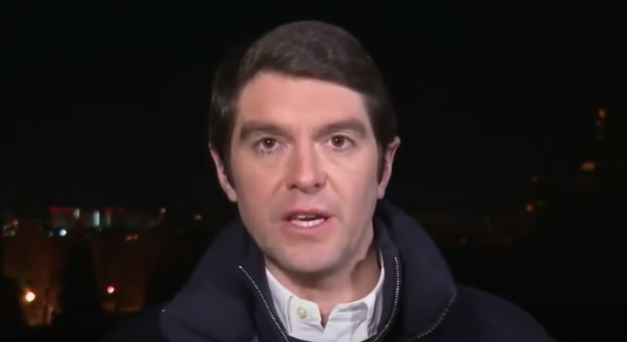 Fox News State Department correspondent Benjamin Hall was hospitalized while reporting outside Kyiv, Ukraine in what was supposed to be a non-military area. Reports are unclear but Hall may have injured his legs in a possible blast.

News anchor John Roberts broke the news that “we hate to pass along to you, but it’s obviously what happens something in the middle of conflict” in that a reporter had sustained injuries while in harm’s way.

And about an hour later, we got more of the horrific details. Breaking in again, Roberts read from this statement from the company confirming the journalist in question was indeed Hall:

About half an hour later they released the following statement:

According to a Facebook post Ukraine’s prosecutor general, Irina Venediktova that included a picture of Hall’s press credentials (via the translation from Facebook), “The explosive fracture of two lower ends - a ‘russskomirnyj’ diagnosis, made by Ukrainian doctors to a British journalist.”

Through the uneven bad translation from Google, it seems Halls was the victim of some sort of explosion that did damage to his legs.

[ The explosive fracture of two lower ends - a "russskomirnyj" diagnosis, made by Ukrainian doctors to a British journalist. At the moment, the journalist is in intensive care under the supervision of doctors. The tragedy happened 2 hours ago today.

I intend to emphasize, in particular, on those war crimes, the victims of which became citizens of our partner states. Understand that the question is sensitive, but I count on the fact that the leaders of the civilized world are therefore more likely to dare to make a decision to close the sky.
Understand that statistics from Ukrainian victims, for various reasons, do not push to make important military-political decisions. With horror, I imagine what the external world's reaction to the war in Ukraine might be after some time - unfortunately, such an arranged world. Conclusion - only we can protect ourselves.
Once again, I want to address our partners - a citizen of your state has been in the territory of Ukraine, doing editorial task. His diagnosis is mentioned above. This man was not at a military facility, where according to Russian officials, they are constantly targeting. Not being at a military facility, he suffered serious injuries.
Of course, the information about the crime is brought to the EPRD and this procedure will be properly investigated. The state of health is unfortunately not our competition.
I suggest you take action.]

Hall wasn’t the first American journalist to become a victim in the conflict. Over the weekend, an award-winning filmmaker for TIME Studios and former New York Times photographer, Brent Renaud was killed while also reporting on the war outside Kyiv.